The iconic Bangkok-based Indian restaurant Gaggan, has been ranked #1 on the Asia’s top 50 list for three years straight and came in #7 on the World’s 50 Best Restaurants list this year. The restaurant is tucked away in a narrow inconspicuous street – until you get to the building, which is a majestic house with a beautiful glass pane front and lamps giving a warm glow. The interiors are set with white wicker chairs, wooden tables and high ceiling fans – almost retro in its feel.  It sets the scene for the dinner that is to come – elaborate, sophisticated and very creative. 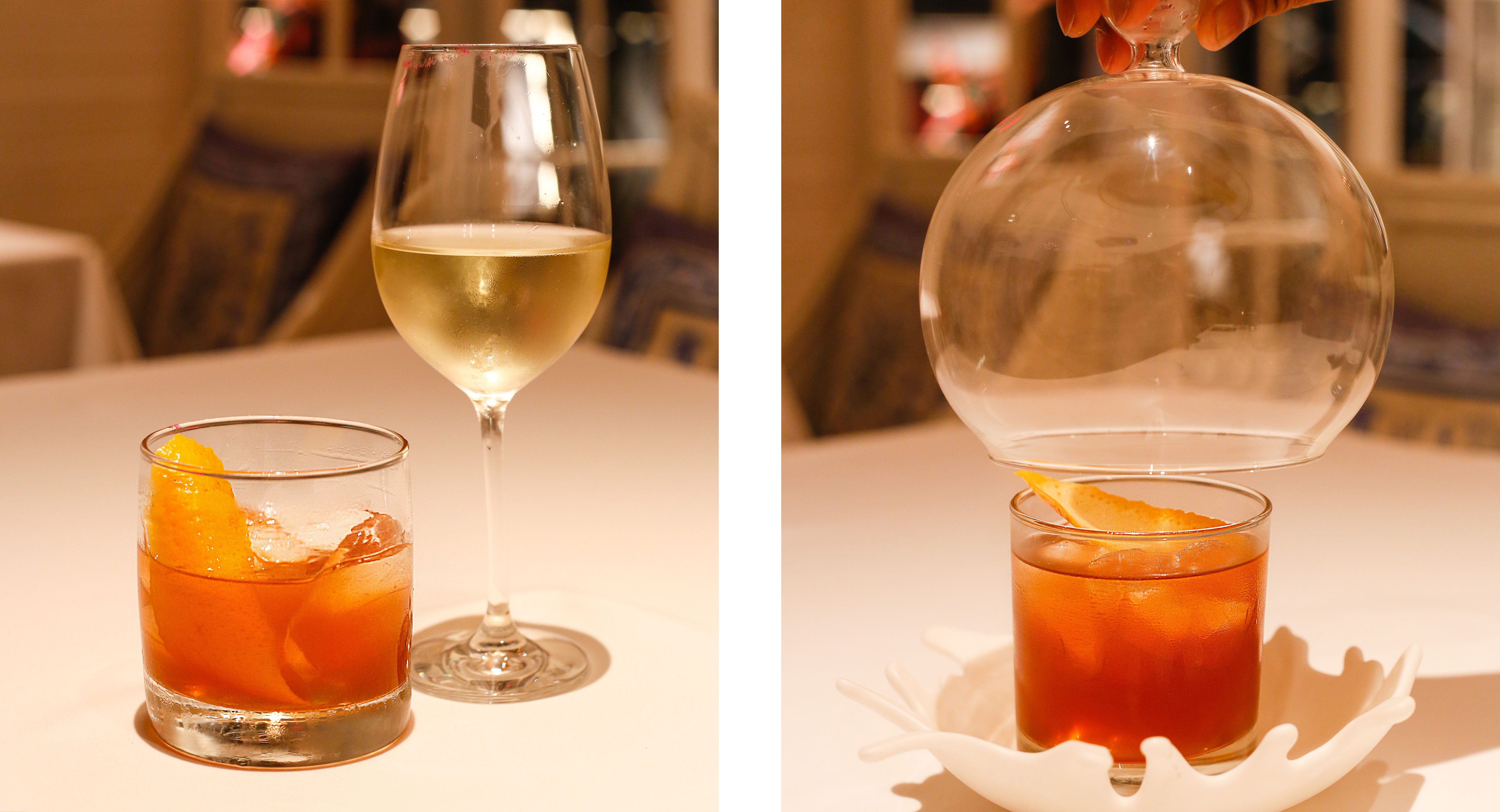 Using the art of molecular gastronomy, Gaggan Anand, has redefined traditional Indian food while still preserving all of the authentic flavours and tastes. Diners are served a 25 course meal which is listed rather enigmatically as a single page of emojis – a way to transcend language barriers. And in true Indian style, 23 of the 25 courses are eaten by hand. The plating is eye-catching and imaginative with each dish carefully thought out and beautifully executed. 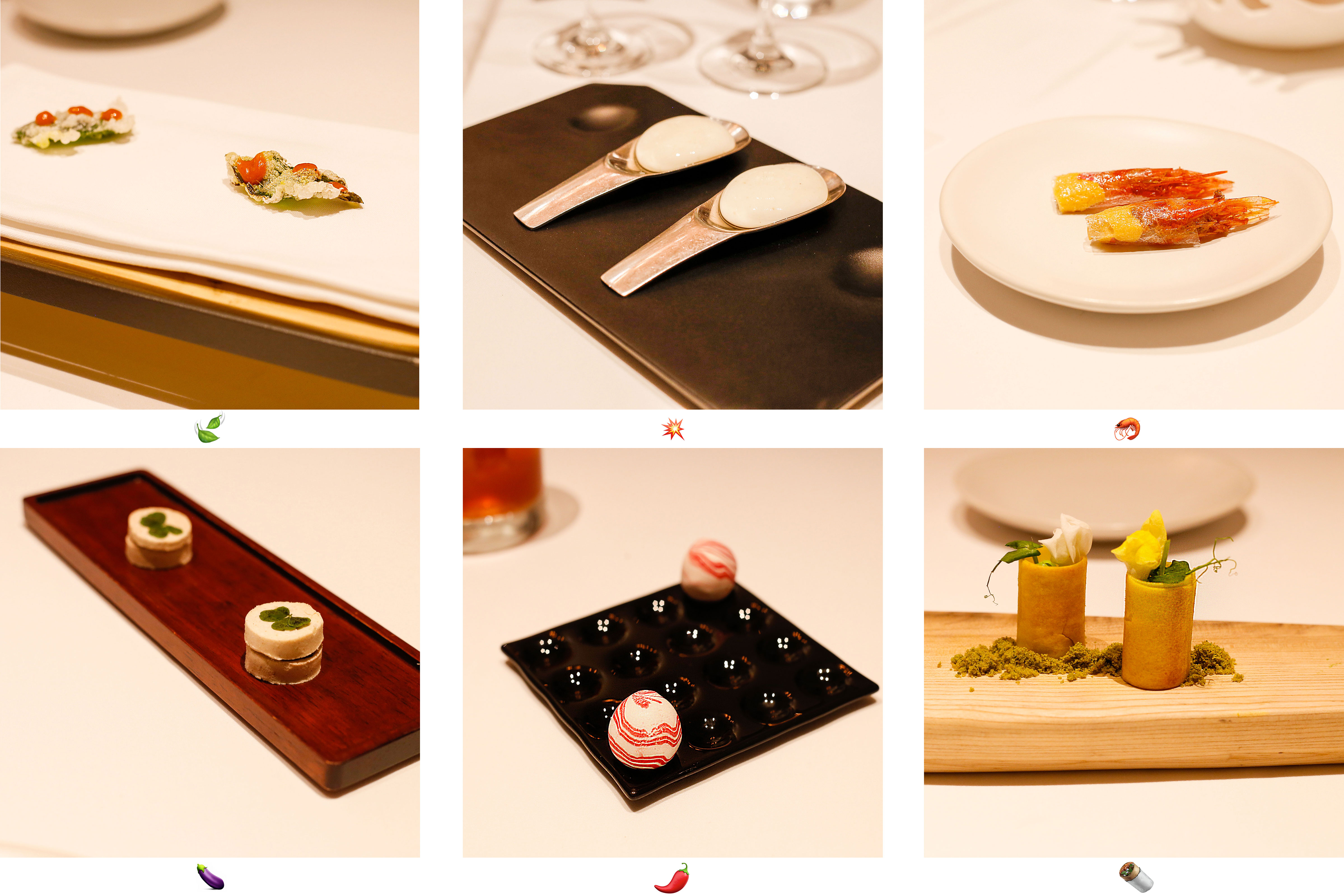 The emojis under each photo is what Gaggan has used to represent each course. Your eyes and palate are left to do all the guess work. What you see is often not what you get!!  And there lies the anticipation as each dish arrives at your table. Only when all the courses have been served and the meal is complete, will diners get a menu with words to let them know what they’ve just had. So be prepared! The first six courses were the pan leaf with chili jam, the yogurt explosion, the tom yum kung prawn cracker, the eggplant cookie, the chili bon bon and the goat brain.

One of his most complex dishes is the eggplant cookie. Fresh eggplant is charred, skinned, cooled, freezer-dried, ground and moulded into a powder and compressed with curry oil and Indian spices. Two are then sandwiched together with a layer of onion chutney jam between them. This whole process takes four days!!

Next, we moved on to the idli-sambar (which to date is still one of my favorite dishes at Gaggan’s – inspired by a Southern Indian breakfast. Hence, the rice bowl emoji, though in this case, it appeared in the form of a rice flour bun), the chicken liver dusted in coconut flakes and the kebab burgers.

The next few courses had a lot of Japanese influence in them. The fish (akami) tacos were really tasty and I wish there were a couple more on this gorgeous stand. The  foe gras yuzu marshmallow which followed had a unique taste and texture to it. I didn’t guess the foe gras in it – which is probably a good thing cause I would have skipped it all together! 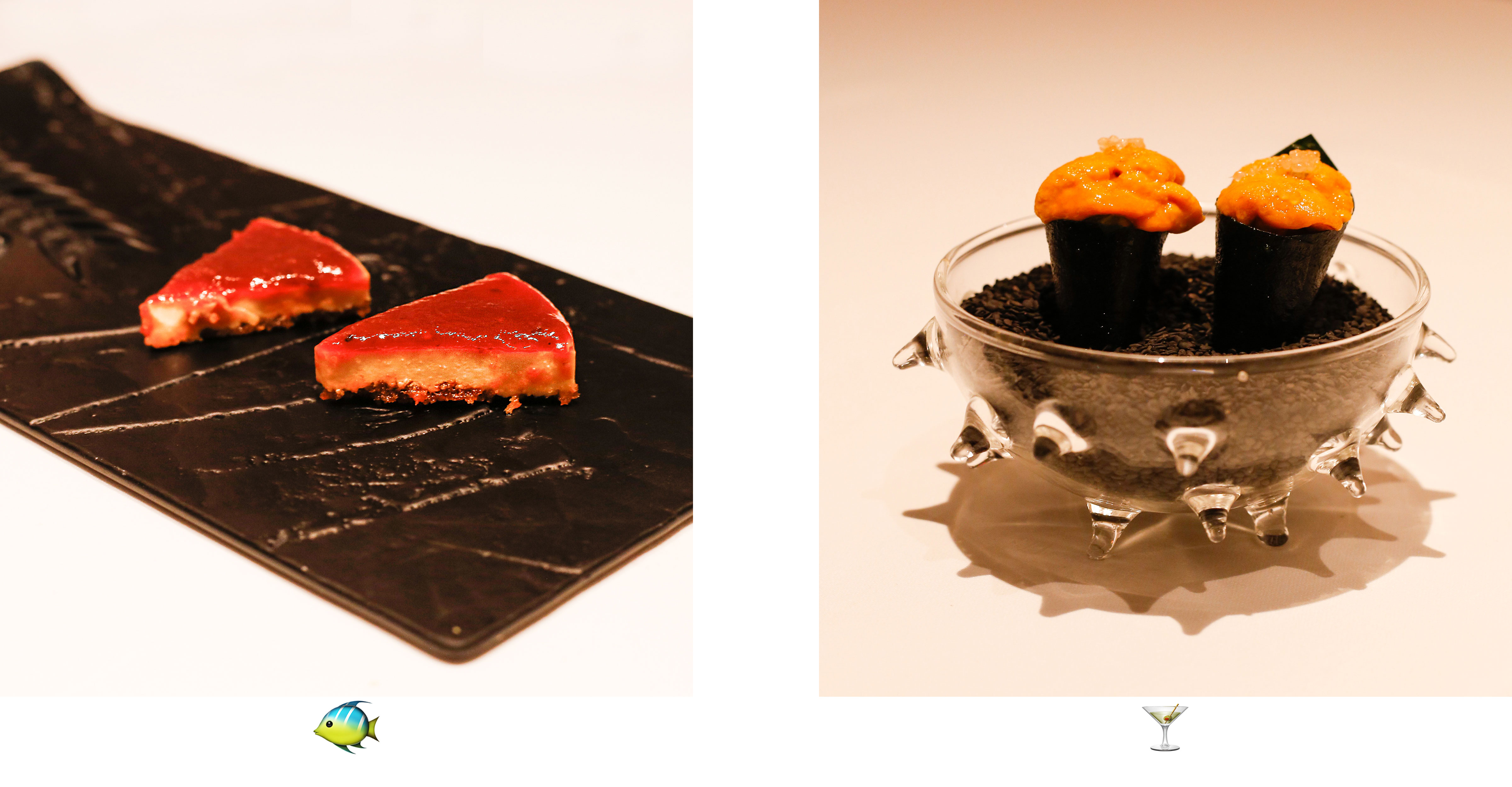 The next course was slightly confusing. The emoji showed a fish but it looked like strawberry cheese cake! So what was it? – A fish cake! It takes your brain a while to process this! Next up, the gin and tonic uni – feel like you can never go wrong with fresh uni. 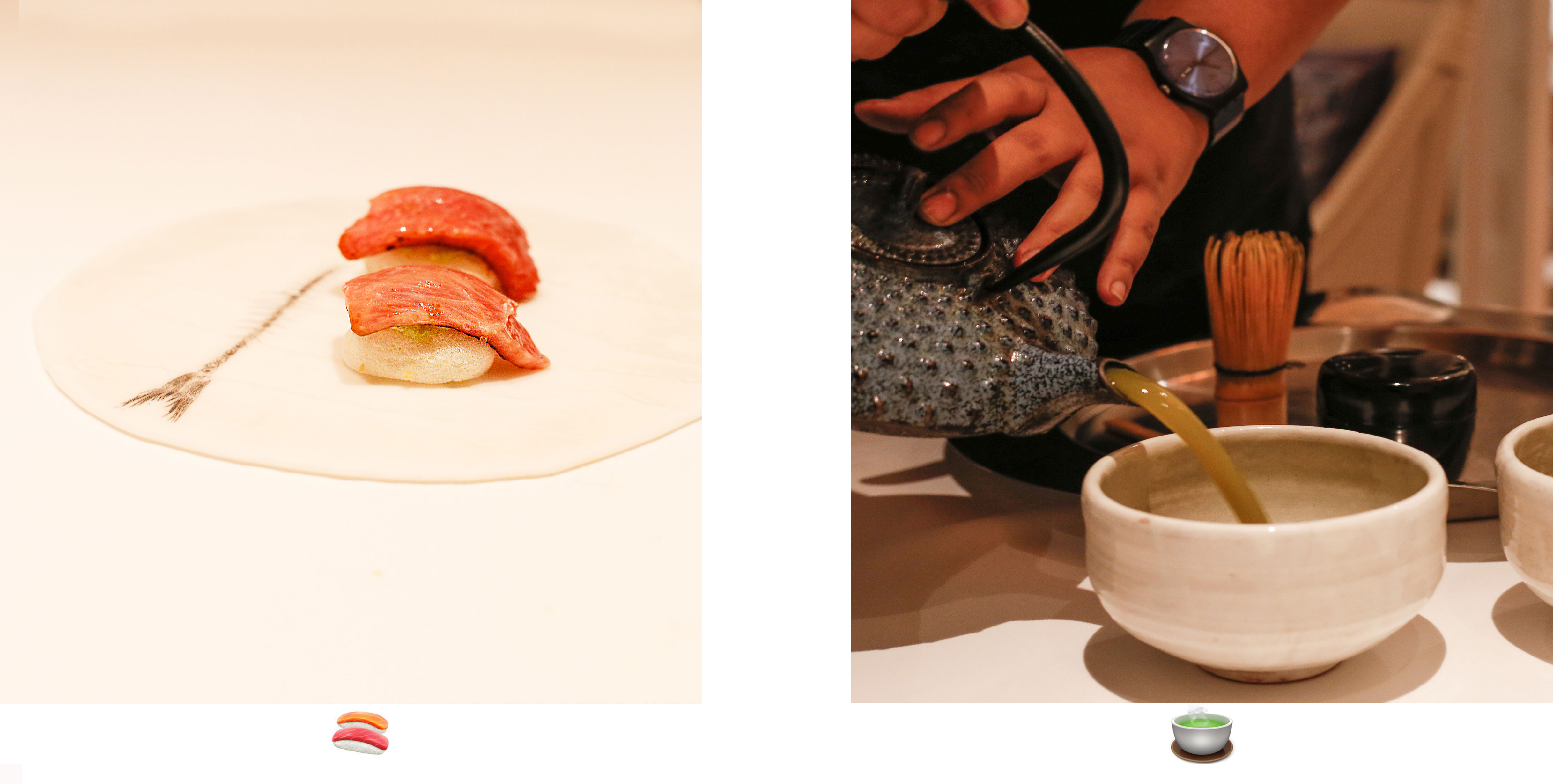 Here we have the chutoro sushi and the summer matcha. The server brings a tray of Japanese tea items and proceeds to pour the “tea” and swish it around as they do at tea ceremonies, but what you’re actually drinking is a vegetable broth. Totally amazing! 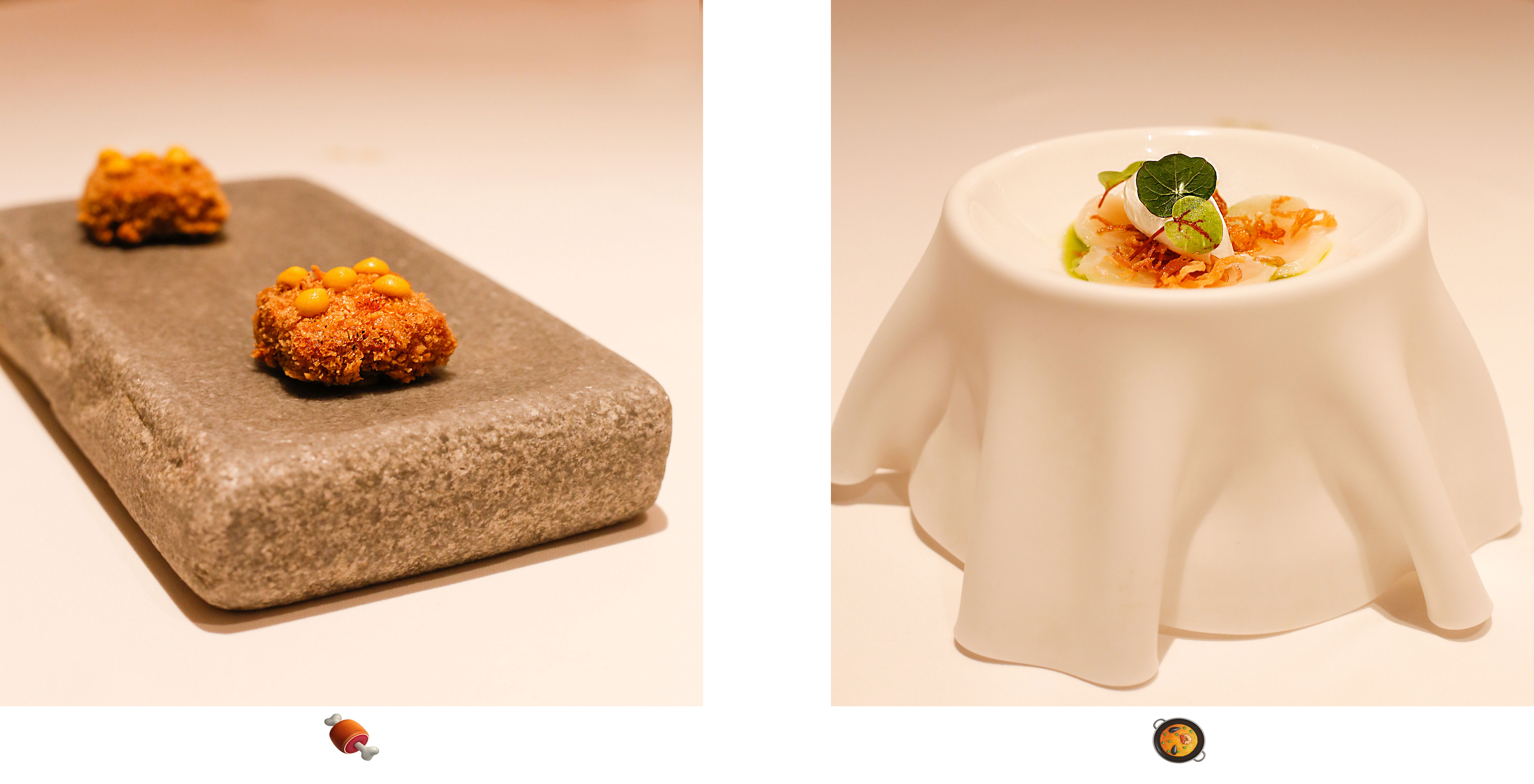 Slowly moving towards the main courses, here we have the pork vindaloo and the scallops in an uncooked curry! These two dishes felt like there was a party going on in your mouth! 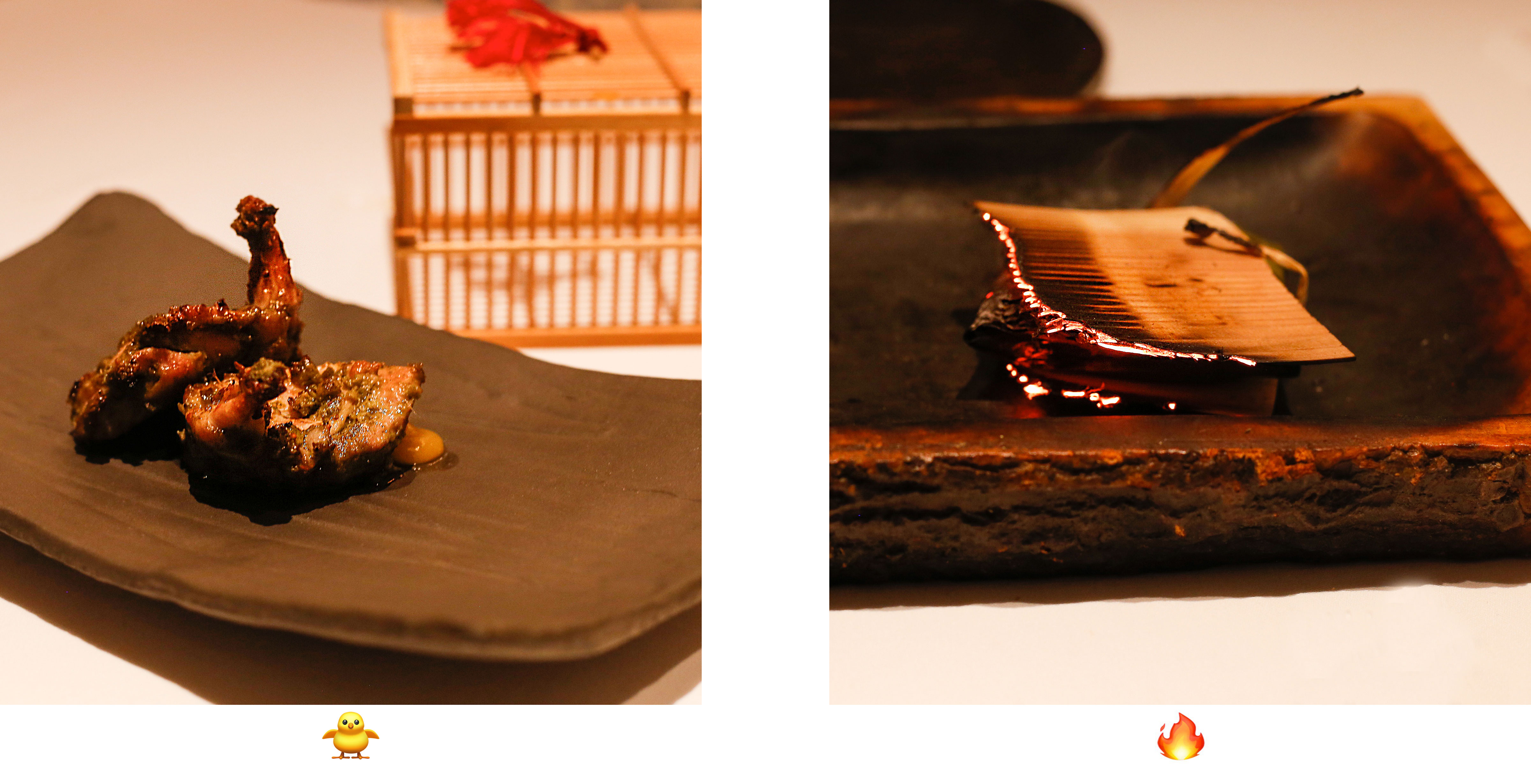 Next we had the quail chettinad – such whimsical presentation as if the bird has flown the coop. This was followed by the cedar wood paturi – a fish seasoned with spices which in this case was a sea bass.

The next course left me guessing what I was eating right up until our server brought the worded menu at the end. It is asparagus charcoal! Who’d have thought! Gorgeous presentation but not my favorite. Next in line was the lobster dosai – India’s version of a pancake! Yum! 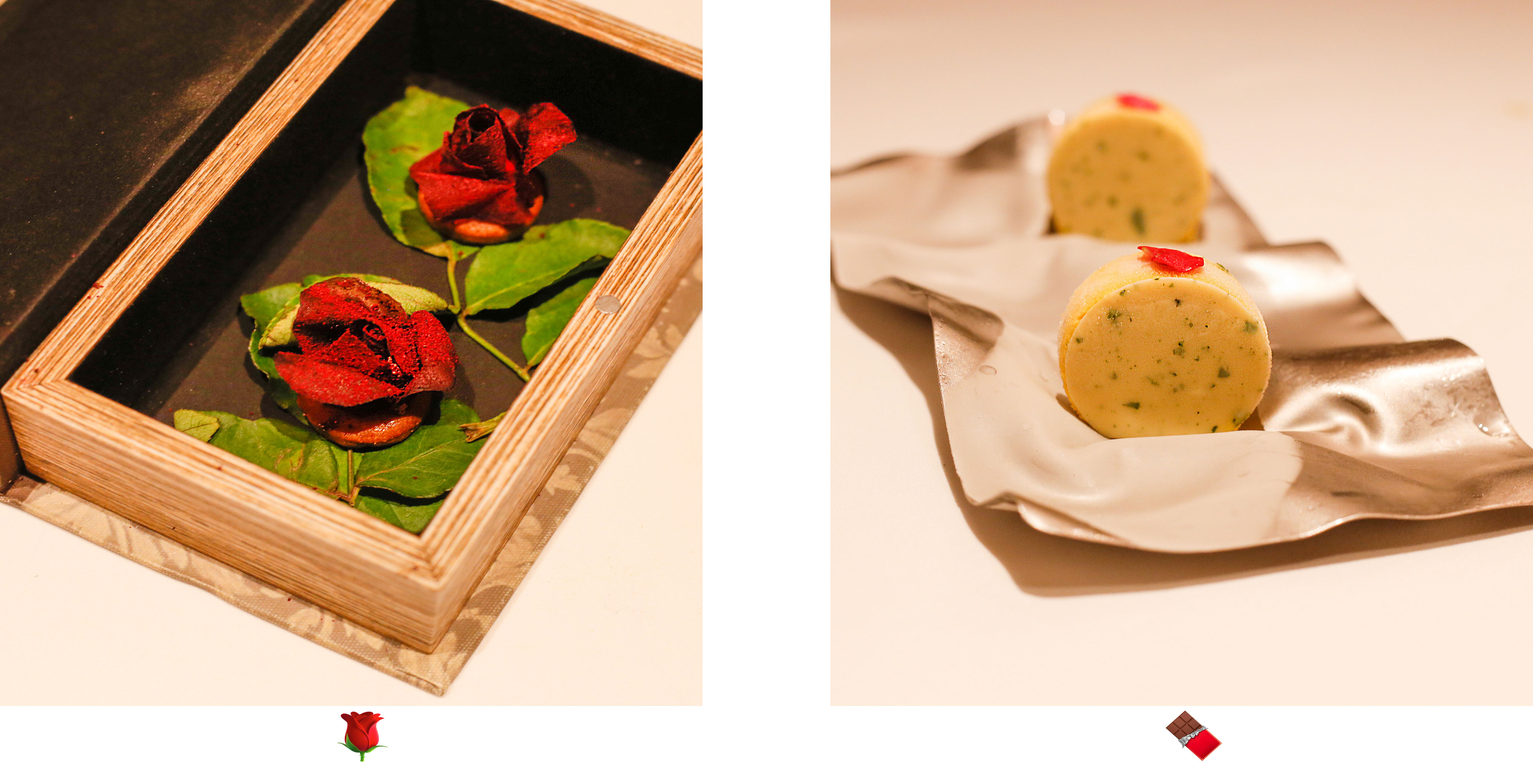 Finally, we’re on to dessert! First off was the dehydrated beetroot rose! Would never have guessed I was eating beetroot, that too, as a sweet dish! Next was the curry mango chocolate – I think this was my favorite dessert of the night. 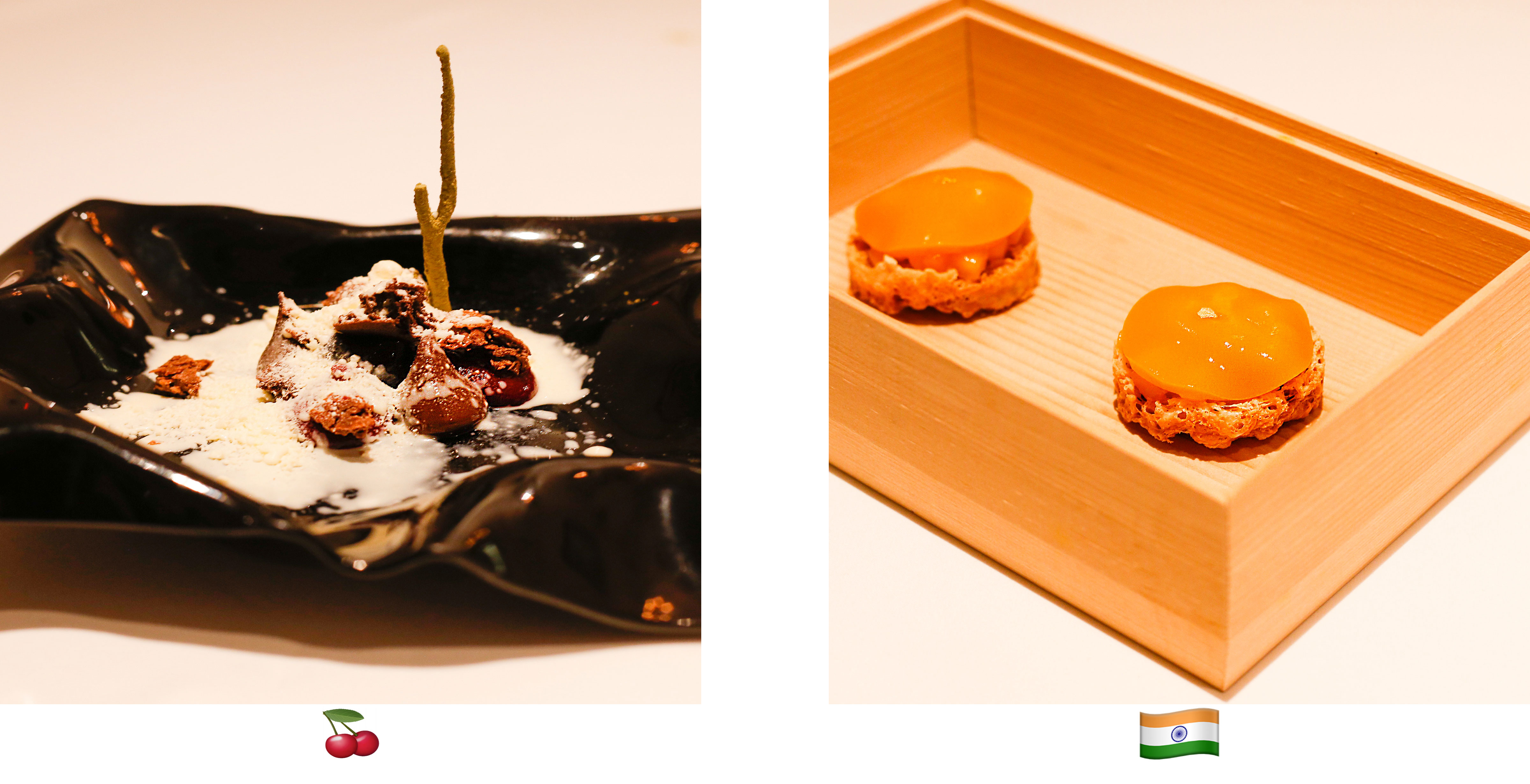 Course number 24 was Gaggan’s interpretation of a black forest crumble. So beautifully plated. The dim lighting in the photo does not do the dish justice. And finally the last course was the mango ghewar  inspired by a traditional Indian dessert – a sweet end to a superb meal! 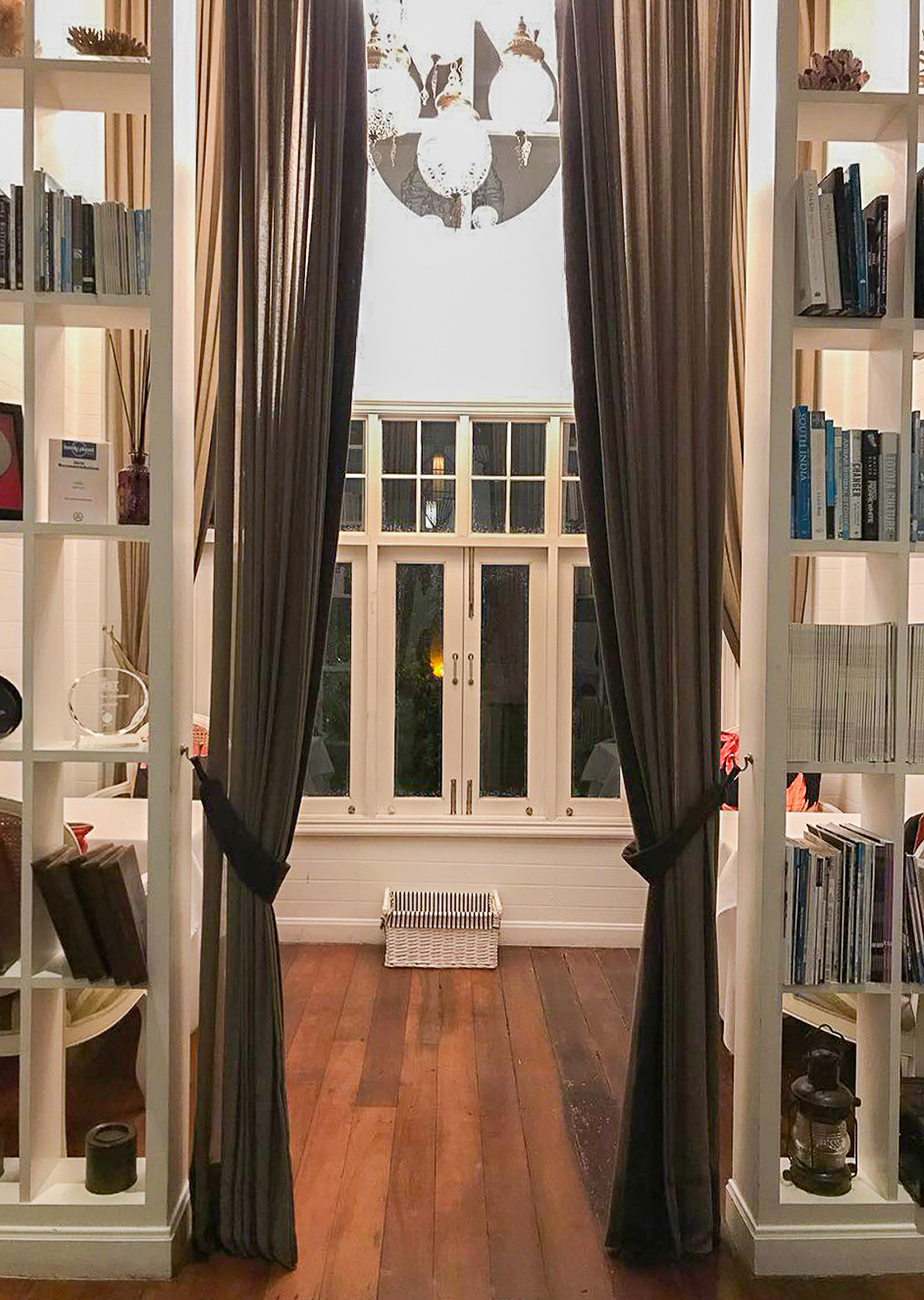 So be prepared for a three-hour extravaganza. Your meal comes in at about 5,000 baht ($150) per person. That being said, it is actually one of the cheaper restaurants in its class, and one that left me extremely content. Gaggan will however be closing his doors in 2020, so if you haven’t been here already, I highly recommend you do so! This was my second visit and hopefully I’ll get to go back for one last hurrah!

Disclaimer: All photos and opinions are my own.