A weekend in Cairo

Cairo is Egypt’s largest city with over 19 million people calling it home. Filled with ancient wonders, bustling old world souqs and some beautiful architecture, this city has plenty to offer. Yes, it is chaotic, overwhelming and can sometimes test your patience, but hey, which place doesn’t have its share of that. 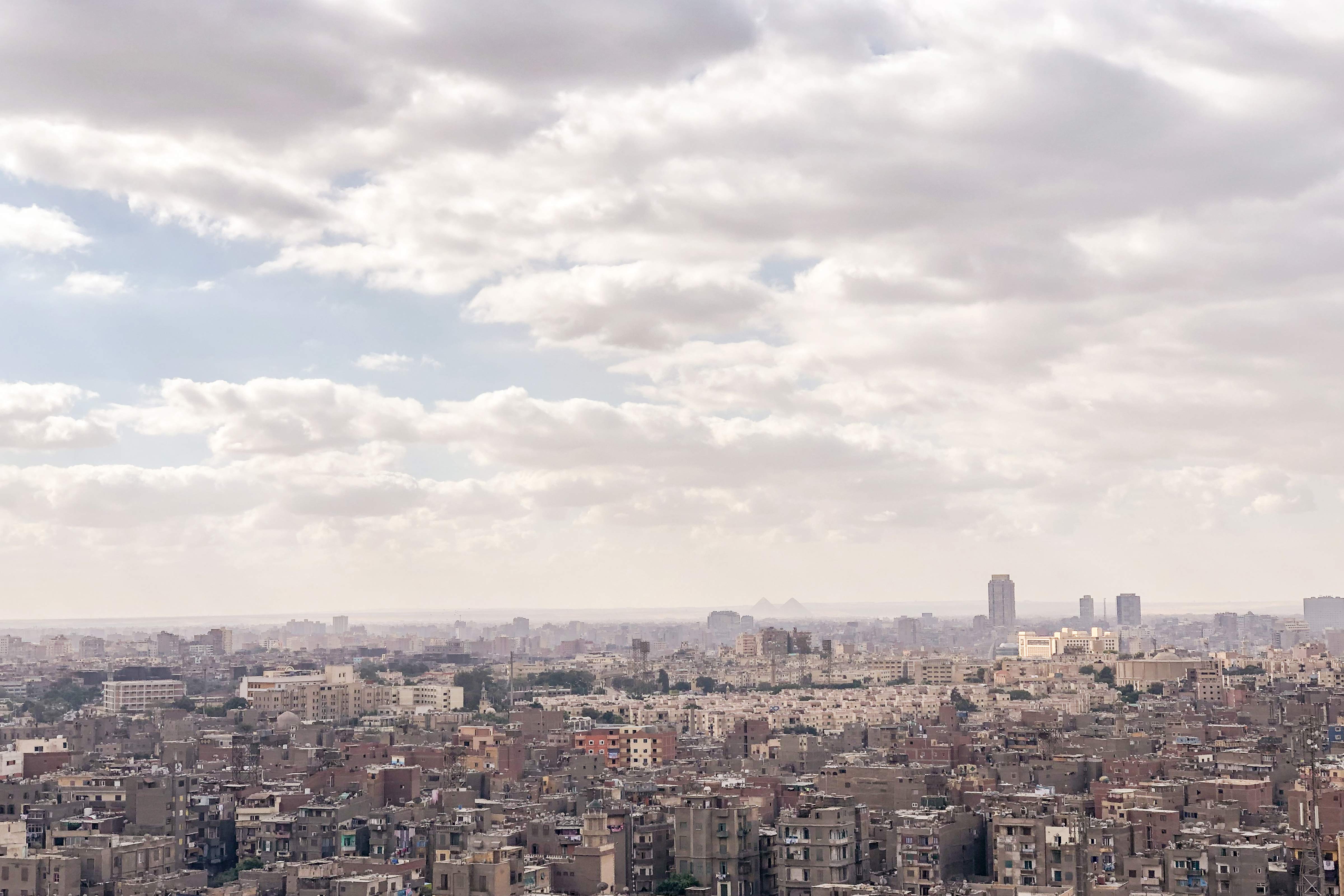 There are many neighborhoods, each with something different to offer. What you decide to do should depend on how much time you have and where your interests lie. We spent a little less than 72 hours in Cairo and it was plenty! 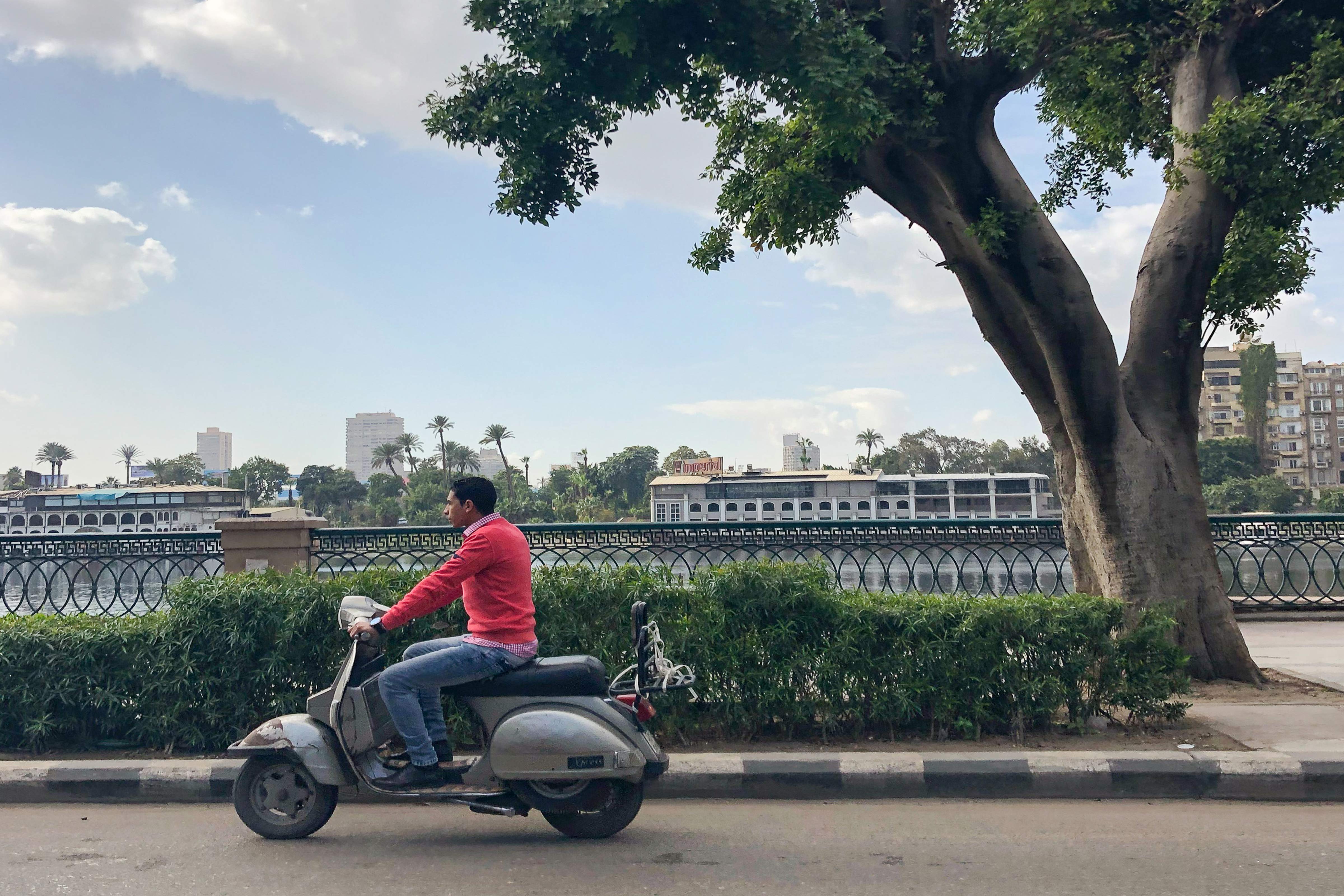 We stayed in Zamalek – a nice neighborhood in western Cairo and on the northern part of Gezira Island on the banks of the Nile. It is filled with charming antique stores, bookstores, restaurants, cafés, shops, and hotels, representing the best that cosmopolitan Egypt has to offer. It is, however, a bit far from downtown but we enjoyed staying away from the hustle and bustle.

There is lots to do and history to explore. Here are some of the things we enjoyed doing while in the city.

The Giza Pyramids and Sphinx 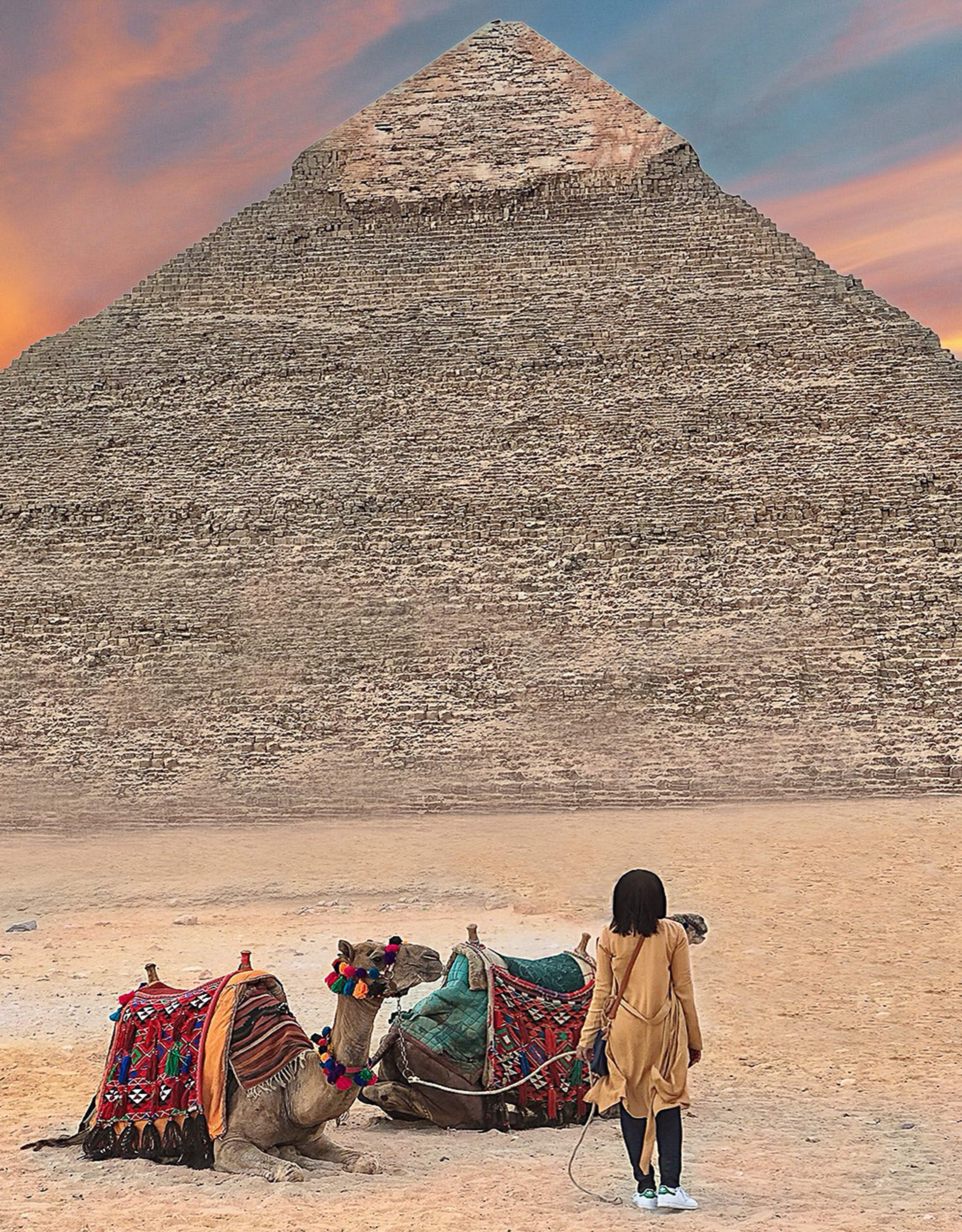 One of the greatest unsolved mysteries of ancient times is the glorious Pyramids of Giza. Doesn’t come as a surprise as to why people are so awestruck by this perfectly symmetrical structure. It’s on everyone’s bucket list!

The pyramids are relics of Egypt’s Old Kingdom era and were constructed some 4,500 years ago. It is believed that they were built as a tomb for the Fourth Dynasty Pharao Khufu and concluded around 2560 BC. 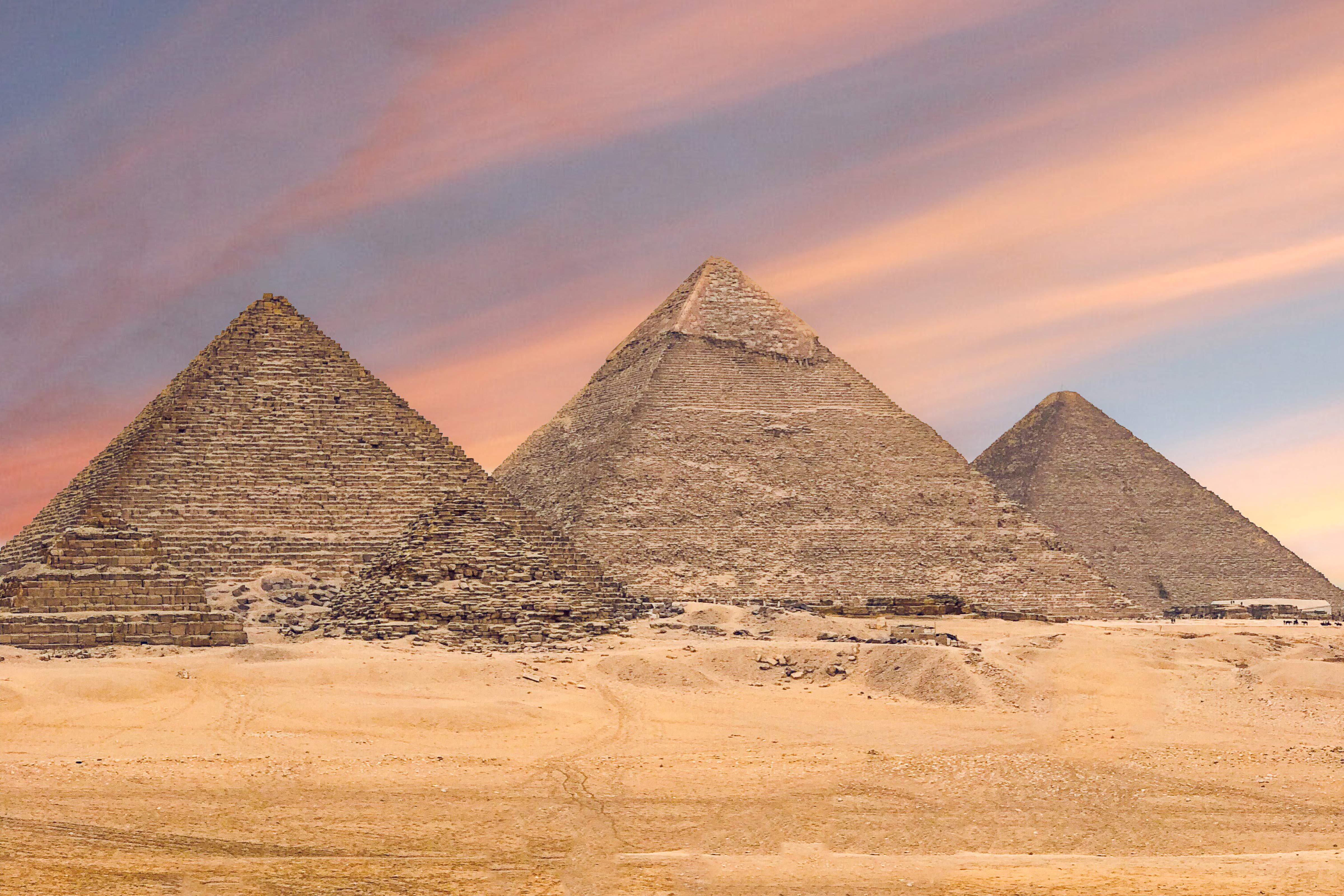 Things to keep in mind while visiting the pyramids… 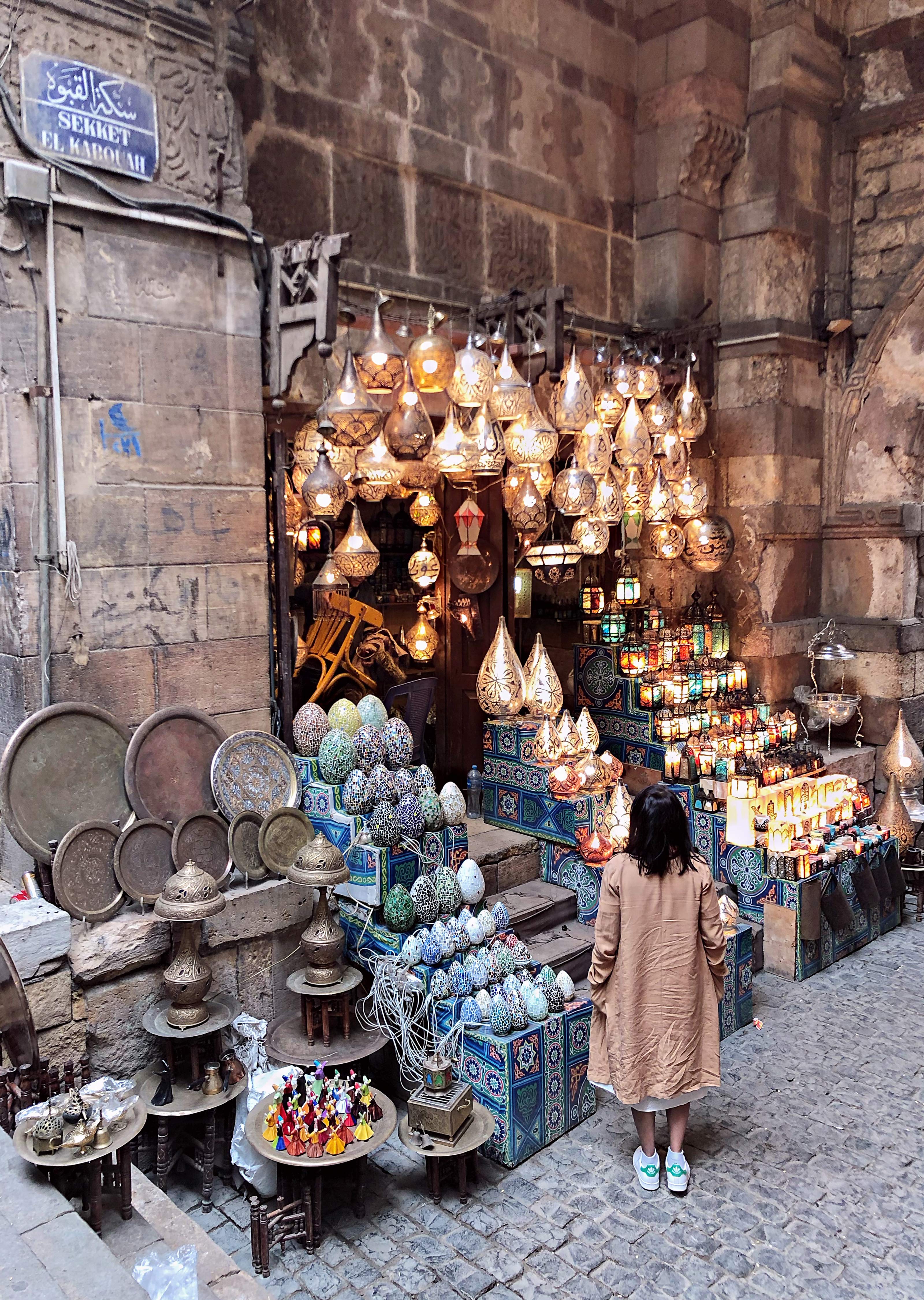 Located in the historic center of Islamic Cairo, the Khan-el-khalili bazaar is one of the main attractions for both tourists and locals. It is a maze of ancient and narrow lanes lined on either side with merchants selling souvenirs, antiques, jewelry and other knickknacks. This souk is not to be missed! 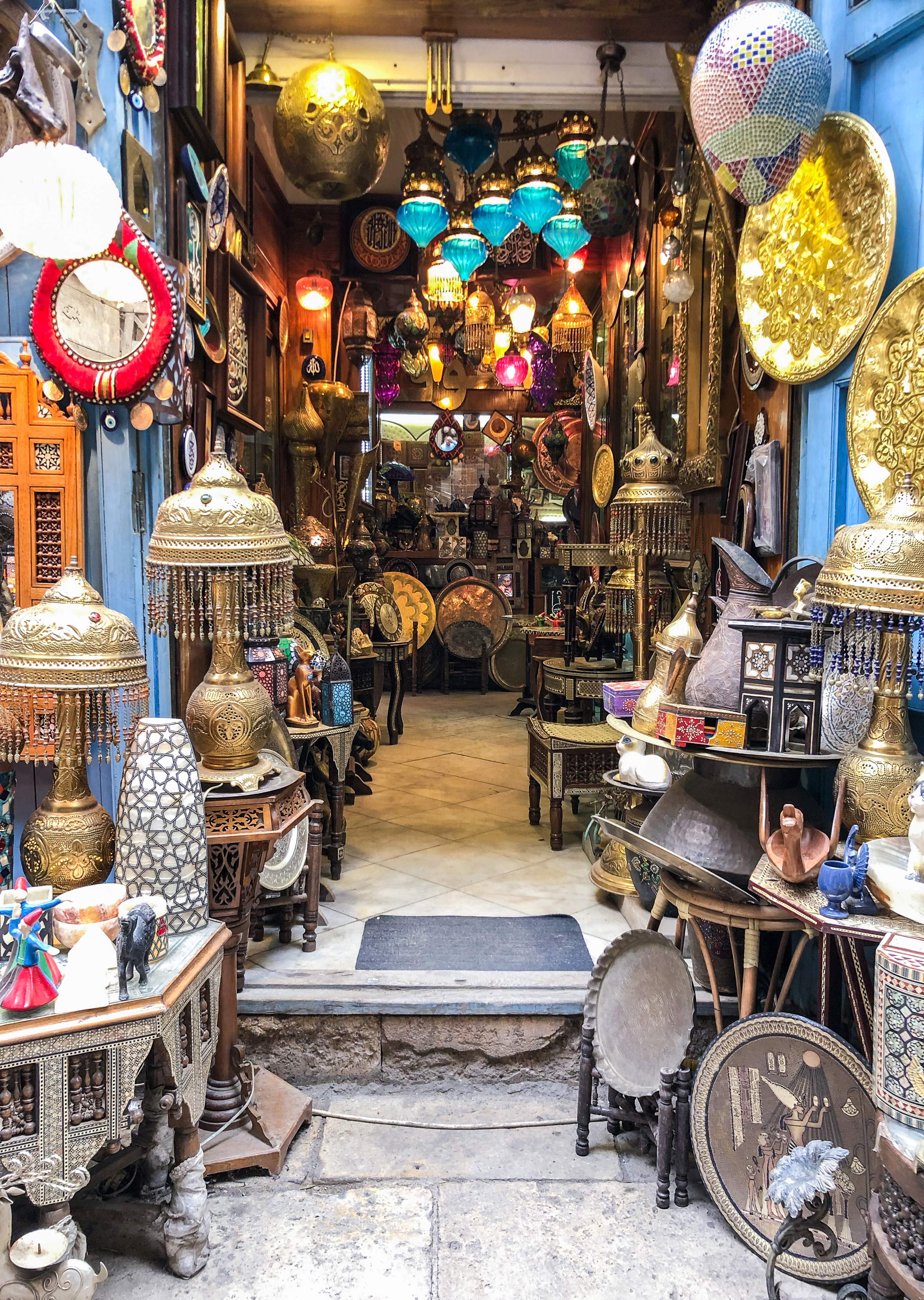 In addition to all the shops, there are several cafes, restaurants and street vendors. The coffee shops serve traditional tea and Arabic coffee with sheesha. 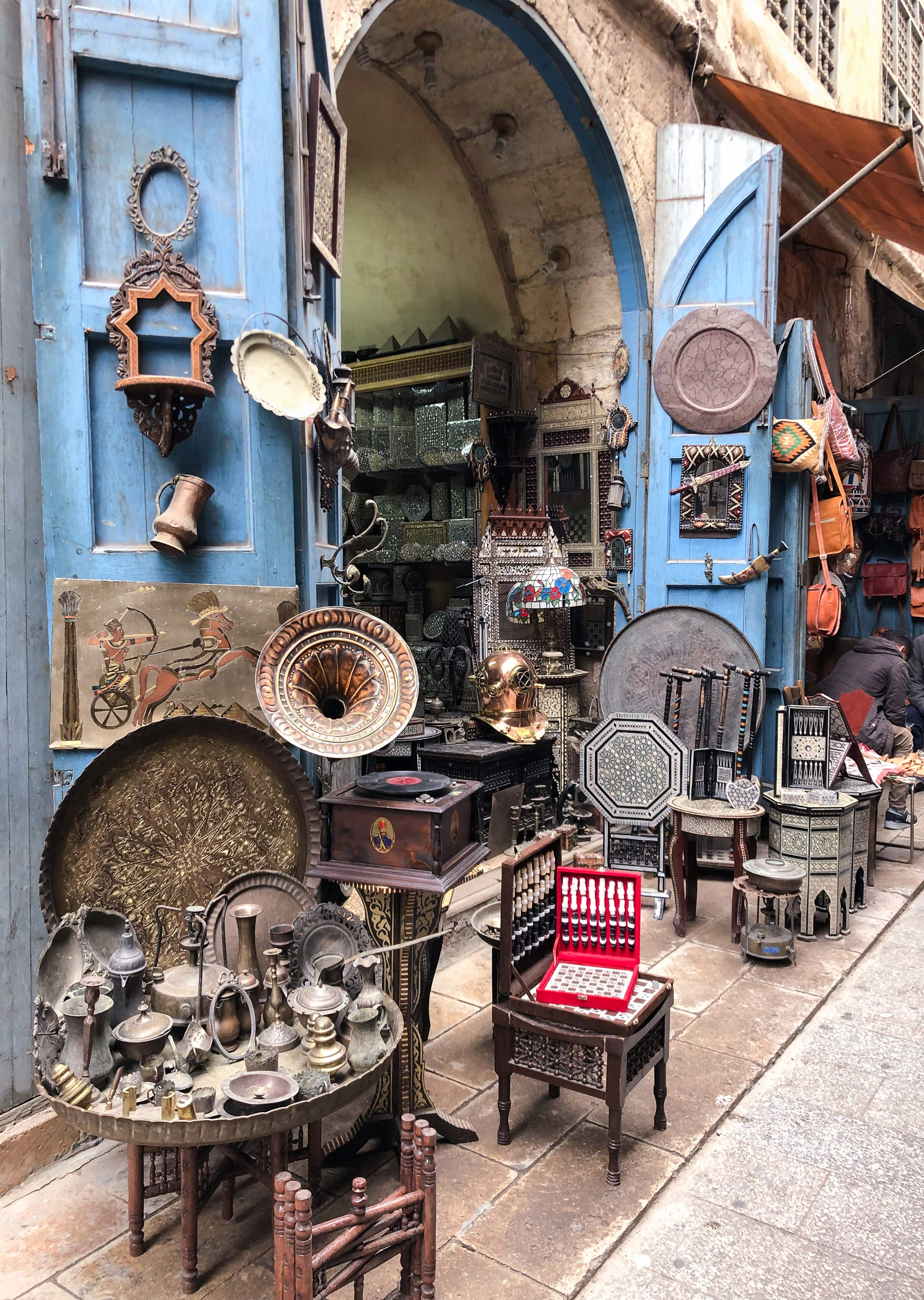 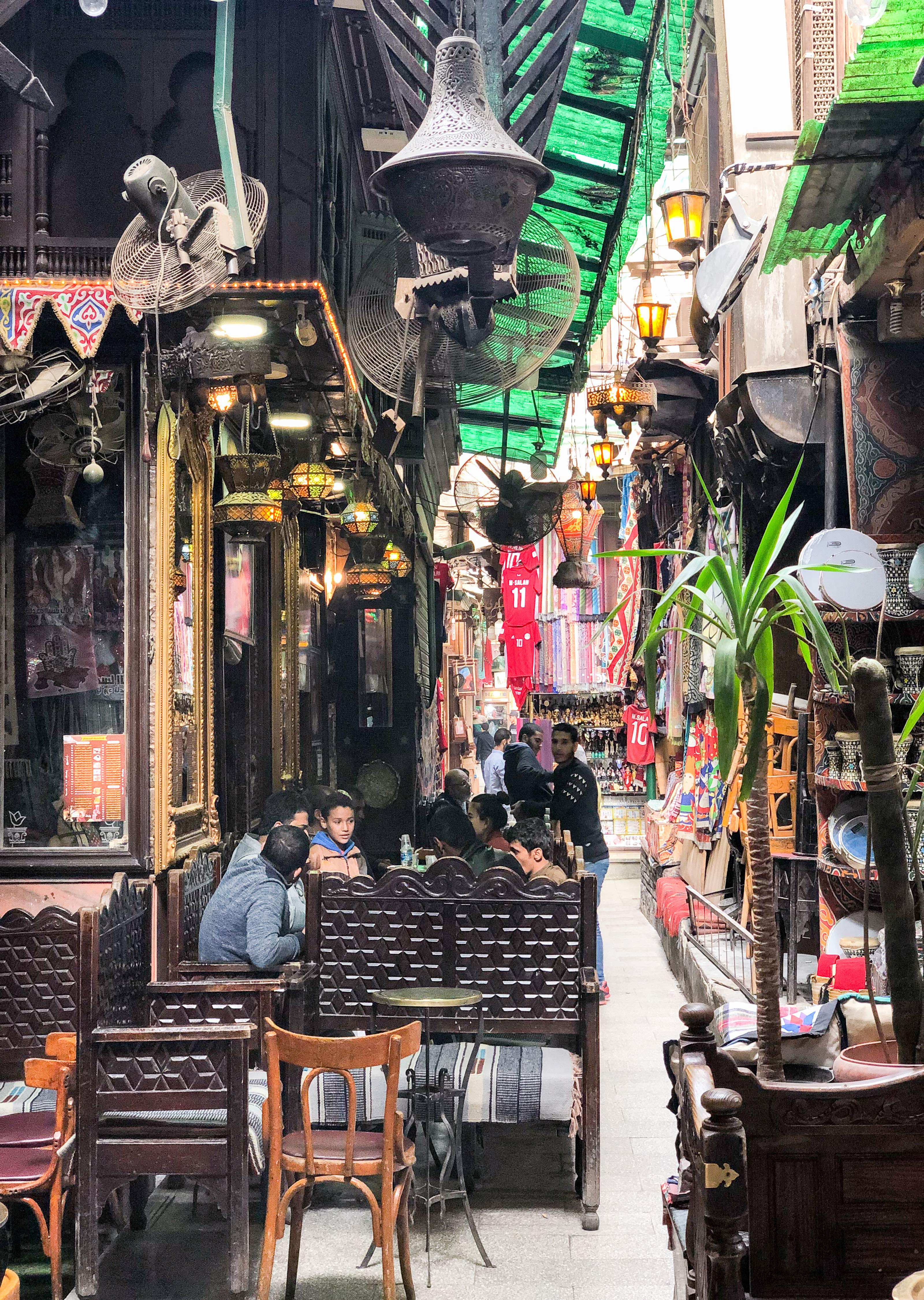 Nestled in a narrow street in this market, El-Fishawy is one of Cairo’s oldest landmarks. Aromatic mint tea is served in dark blue teapots, served on golden trays and poured into ornate glasses. The perfect spot to unwind in between all the shopping. It is also been said that the famed Egyptian novelist, Naguib Mahfouz, penned parts of his Nobel Prize winning novels right here. How great is that! 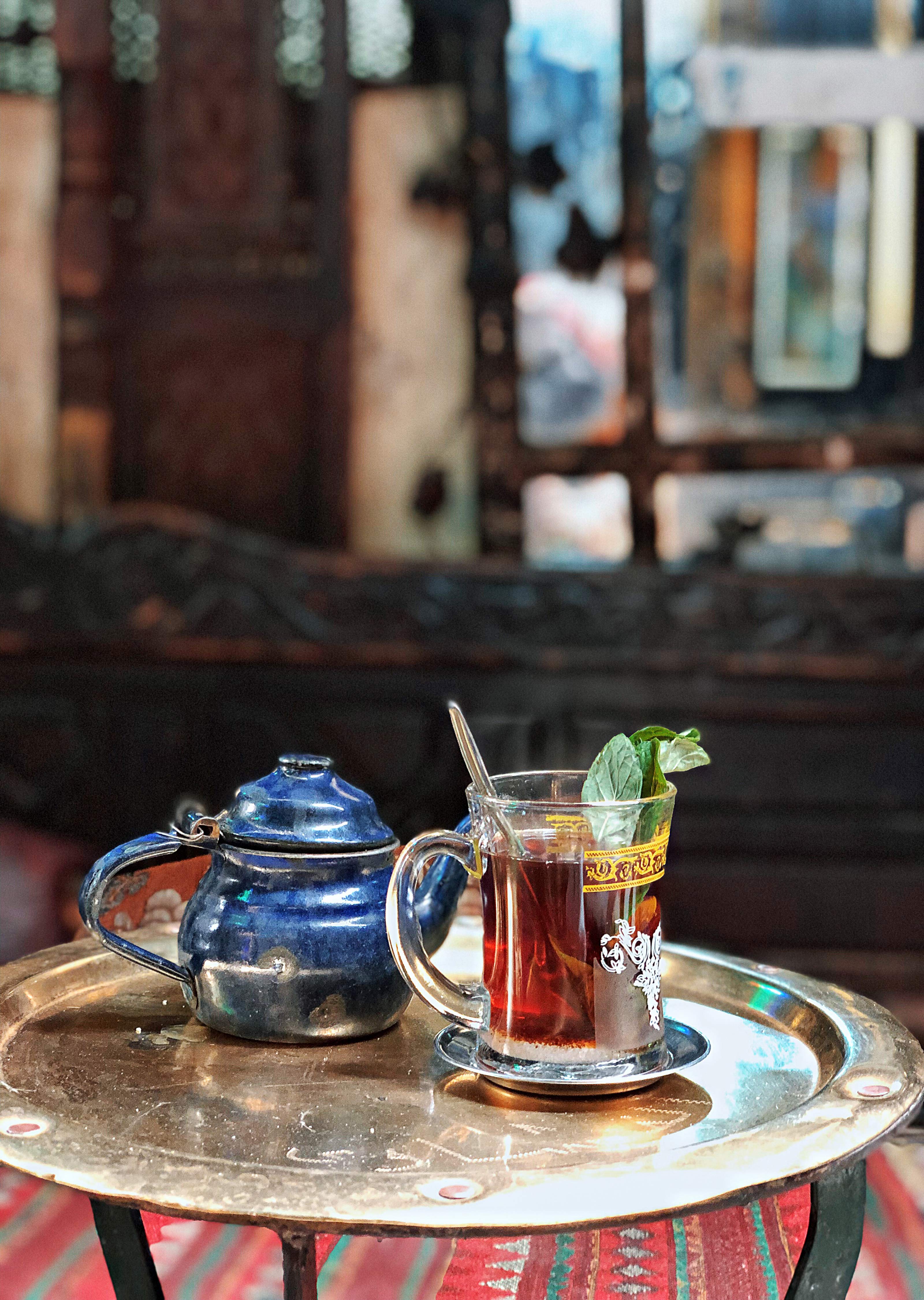 The Great Mosque of Muhammad Ali 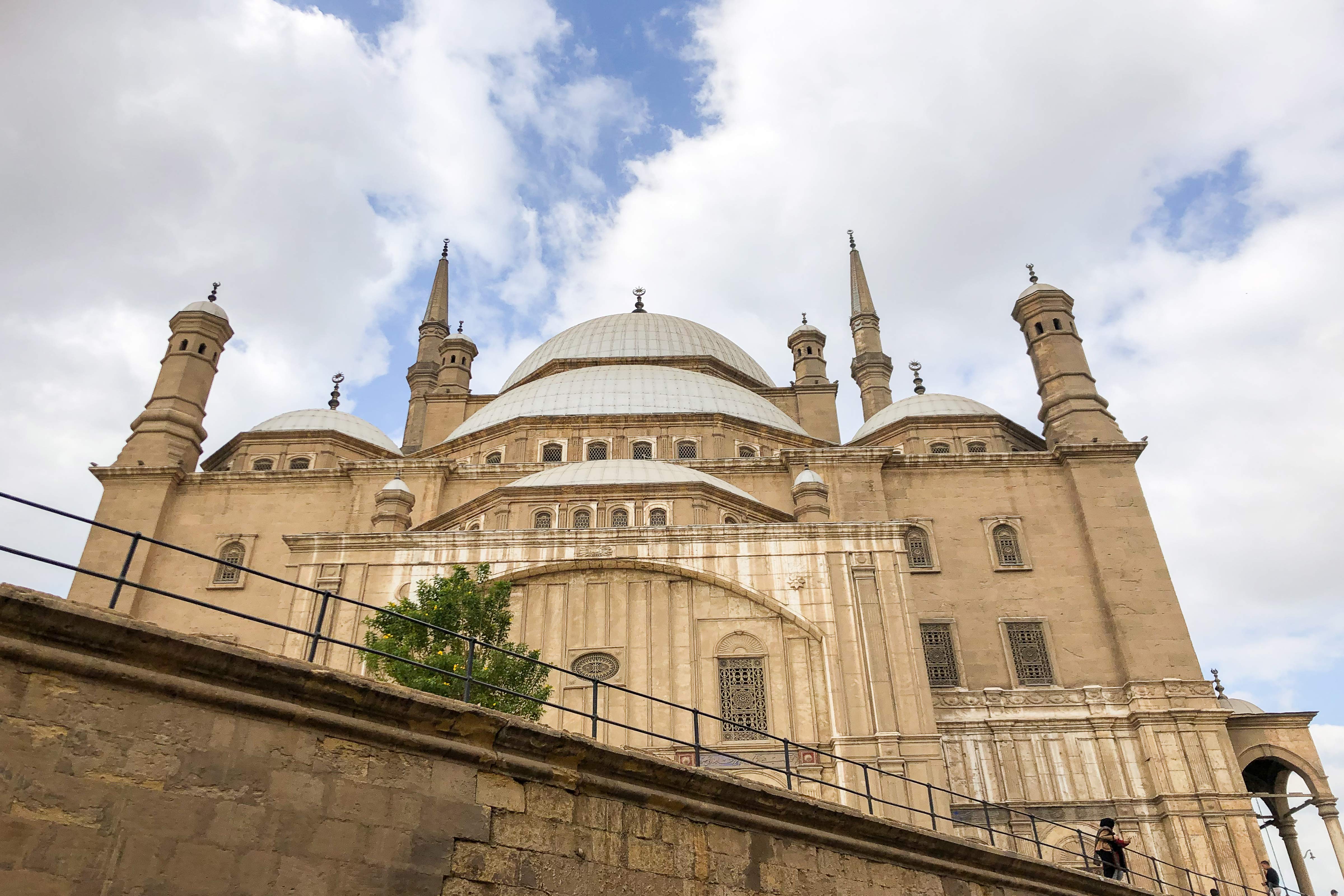 Situated in the citadel, this Ottoman mosque, the largest one that was built in the first half of the 19th century, with its animated silhouette and twin minarets, is the most visible structures in Cairo, apart from the pyramids of course. 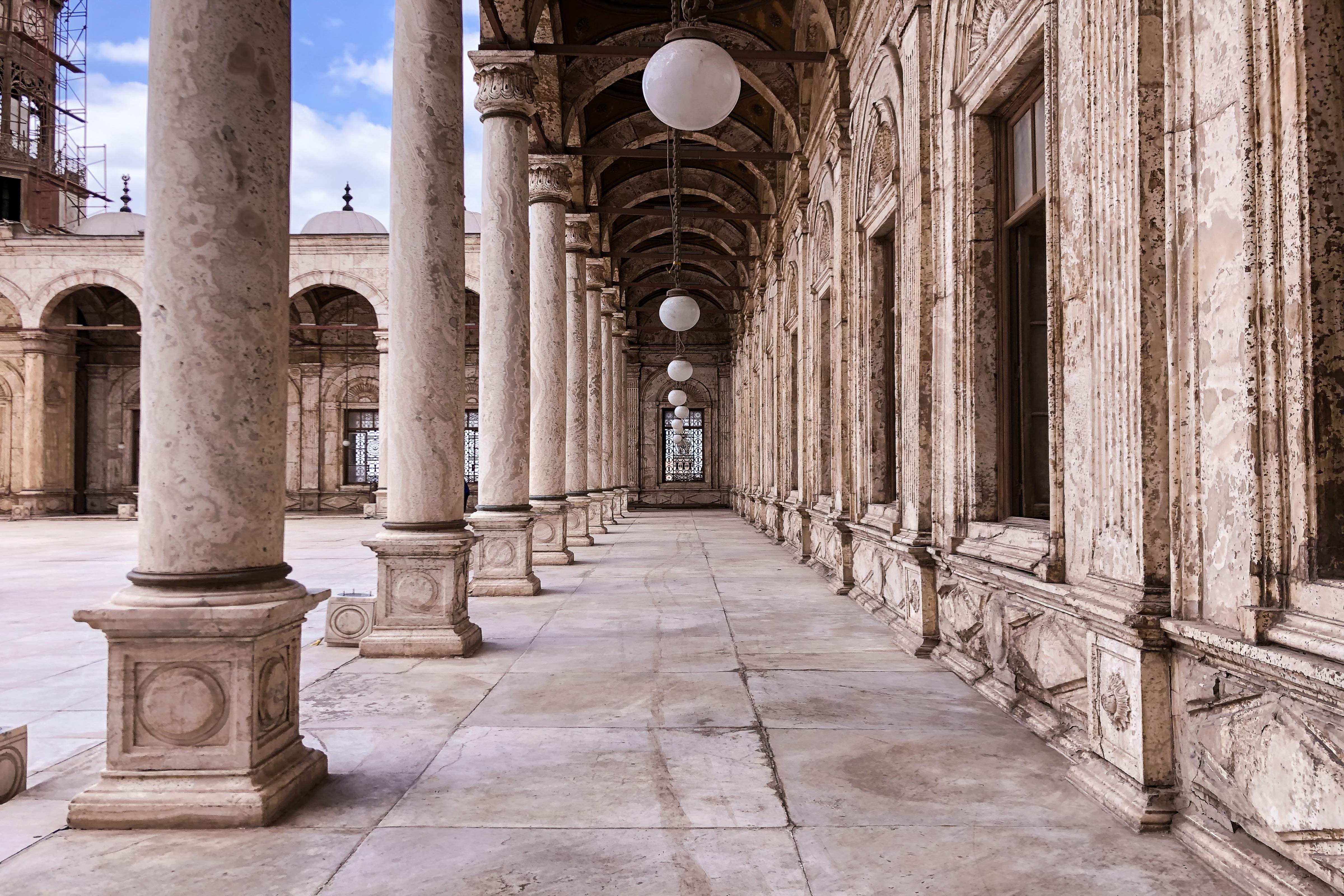 Its gorgeous architecture and grandeur makes it one of the most renowned and historical landmarks in the city and the most frequently visited spot in Cairo. 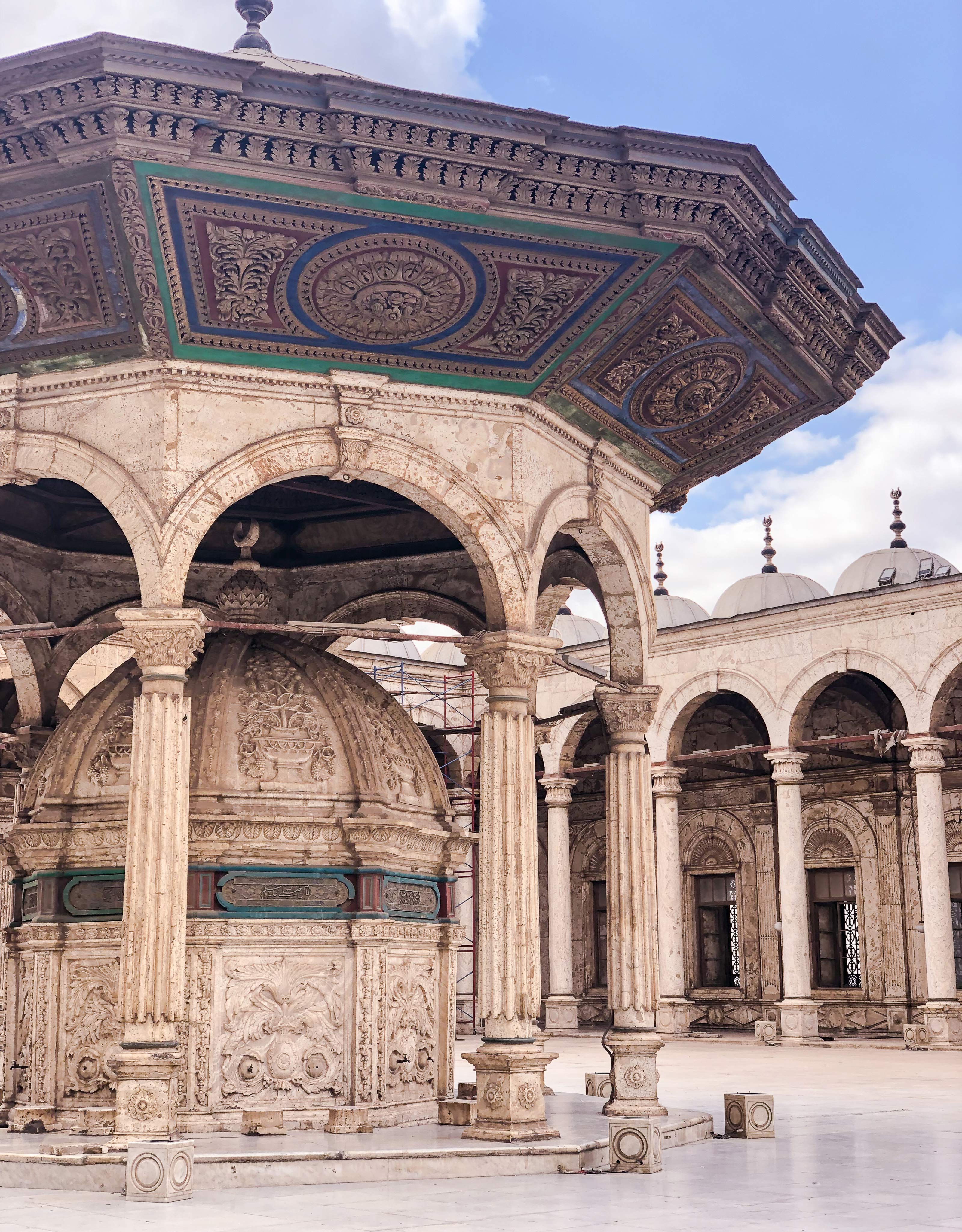 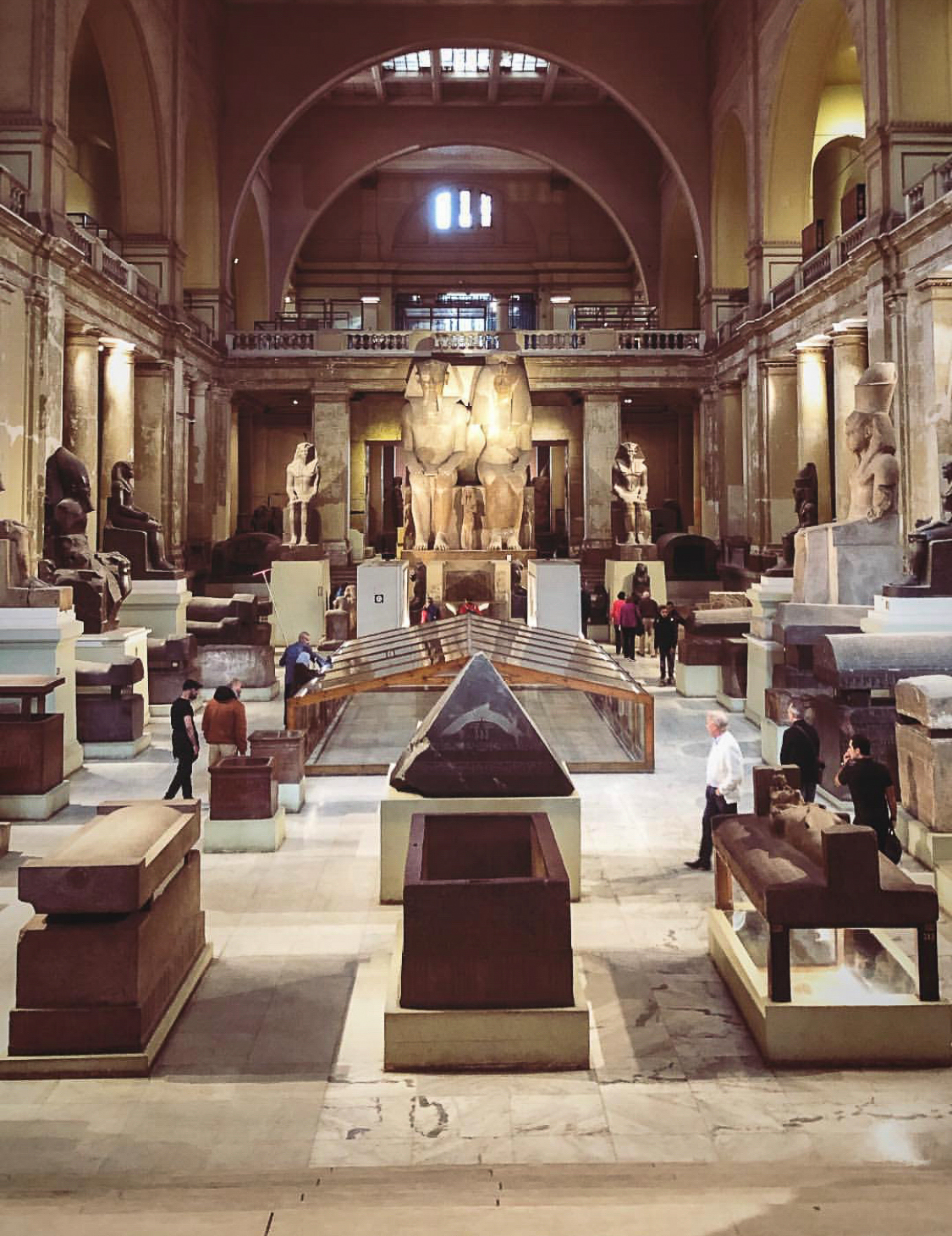 The Egyptian Museum contains many important pieces of ancient Egyptian history and houses the world’s largest collection of Pharaonic artifacts and antiques. With multiple floors filled with statues, papyrus, paintings, jewelry, and more, there is plenty to see for the history buff. If you have the time for a proper tour, it is worth hiring a guide because the collection is unfortunately very poorly labeled. However, the Grand Egyptian Museum, which is currently under construction, is set to open later this year. It will include exhibits of the full Tutankhamun collection with many pieces to be displayed for the first time. The museum is sits on 50 hectares (120 acres) of land approximately two kilometers from the Giza pyramids.

If you are a foodie and love to try out different cuisines, then this tour is a must. You learn about Egyptian food, its history and cultural significance while taking in the streets of Downtown Cairo. It does involve a moderate amount of walking but in my opinion, that’s the best way to do it! Works up an appetite too. Heads up, they are very popular and spots get filled very fast so I recommend making that booking in advance. 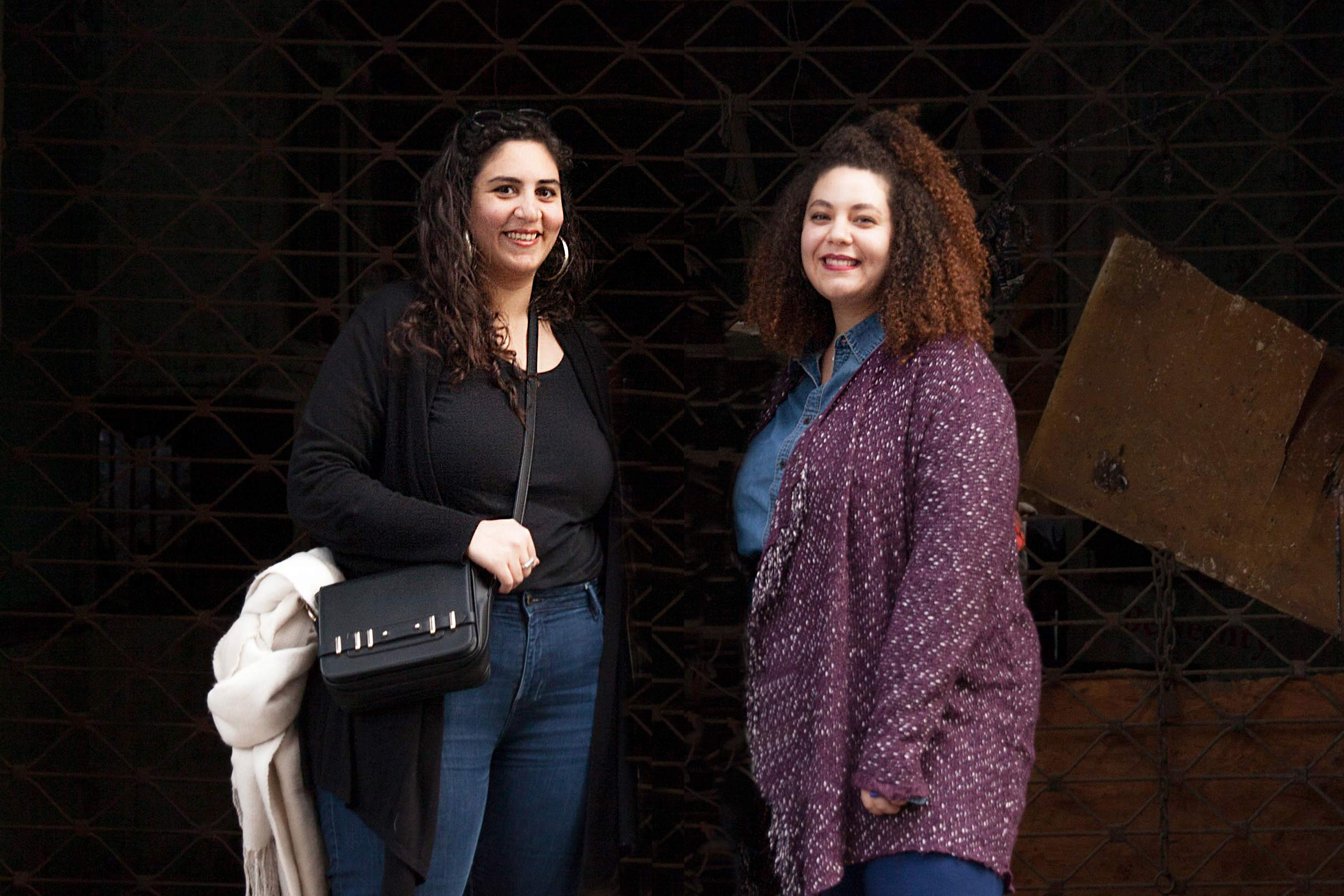 Best friends for 13 years, and sharing a strong passion for food and travel, Laila and Mia were about to start a food blog together until they realized they were more interested in being directly involved with people. Their main aim was featuring Egyptian cuisine that’s very under-rated.  Bellies En-Route’s is a memorable, authentic food experience, and not just hopping from a restaurant to another. The first tour was on the 19th of November 2016, and since then, they have toured with thousands of guests from over 40 countries.

If you do not get the chance to do a food tour then definitely make it a point to eat some koshari – it is the national dish of Egypt. It’s filling, delicious and extremely cheap and it also happens to be wonderfully vegan. Boiled macaroni, spaghetti, vermicelli, lentils, rice, whole hummus, and fried onions topped off with tomato sauce and a special garlic and vinegar dressing.  It is one big happy carb fest and it is the most popular street food in Cairo. A couple of other favorite places are Zooba and Felfel. 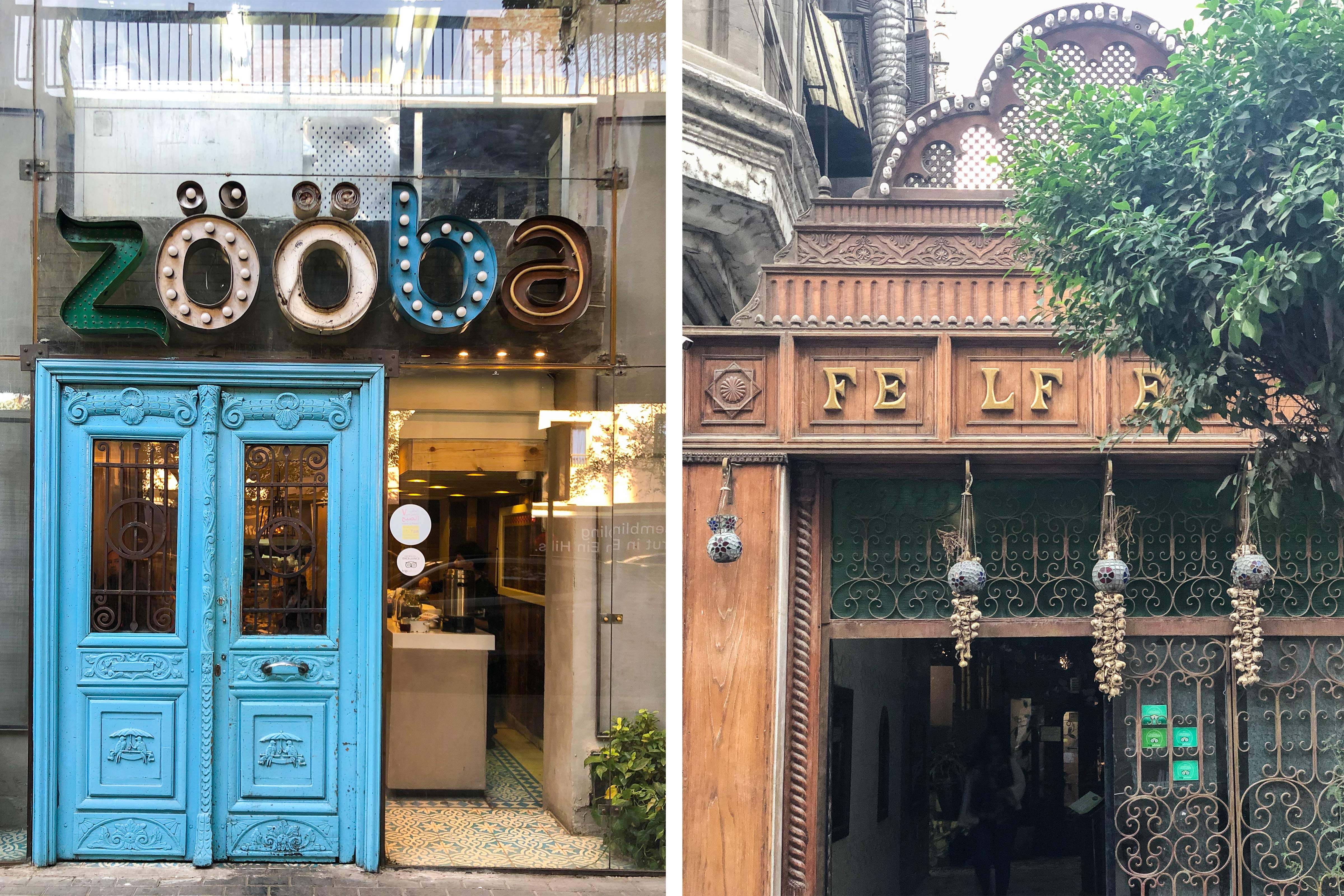 Now, if you have a few more days to add to your trip to Egypt and you are an avid diver or just like the sun, beach and sand, then Sharm-El-Sheikh should be your next stop. 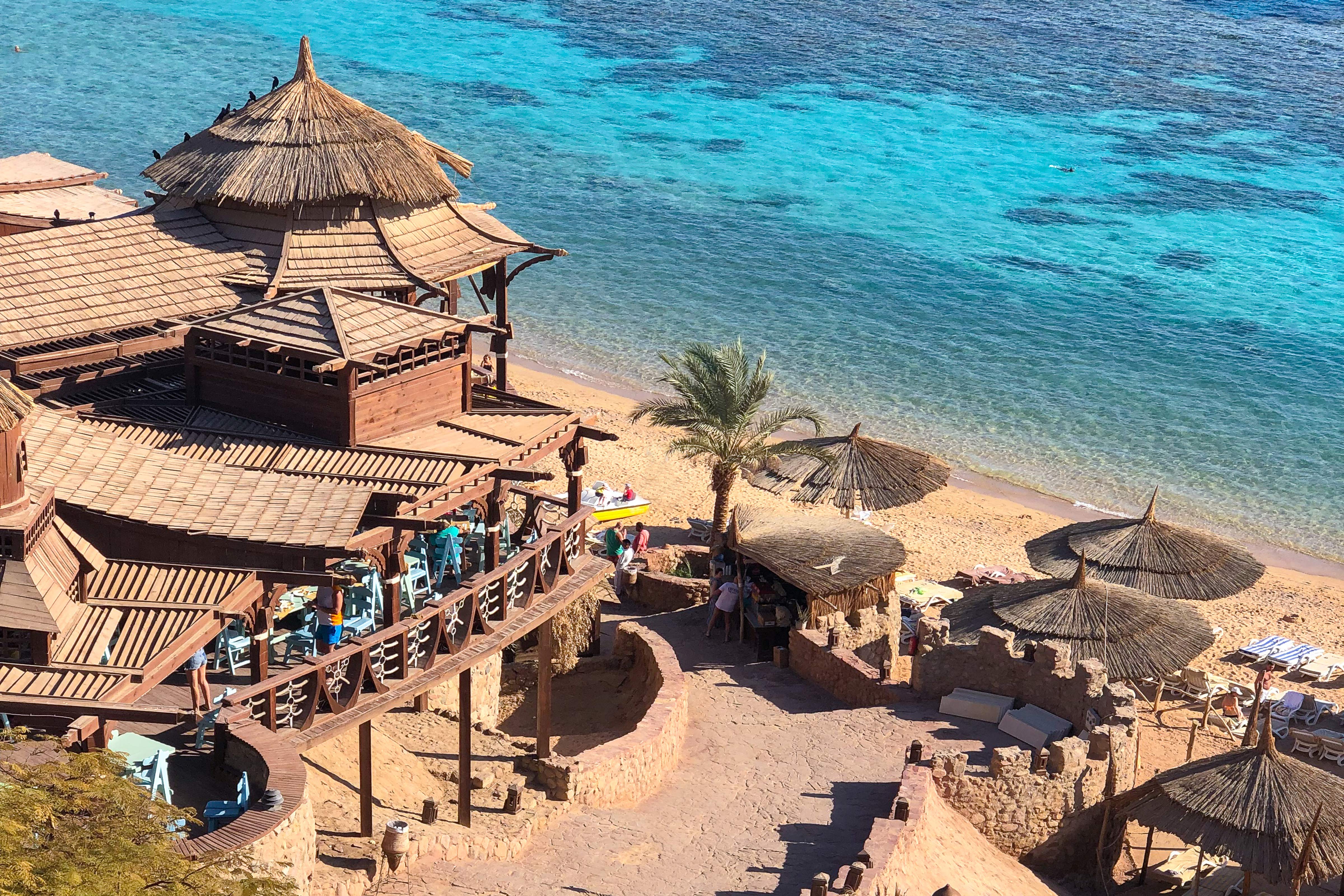 Sharm El-Sheikh is situated at the southern tip of the Sinai Peninsula in Egypt, between Mount Sinai and the Red Sea. The ocean is an underwater paradise with reefs filled with beautiful corals and colorful fish which makes it perfect for diving and snorkeling. There are plenty of four and five star beach resorts (which offer all-inclusive packages) to choose from. There isn’t much to do in Sharm-El-Sheikh in terms of sightseeing or eating out, so pick your hotel wisely. Most resorts are self sufficient – and if you are looking for that “do absolutely nothing” beach holiday getaway, then this is your place. Three to four days, or even just a long weekend would be just ideal. 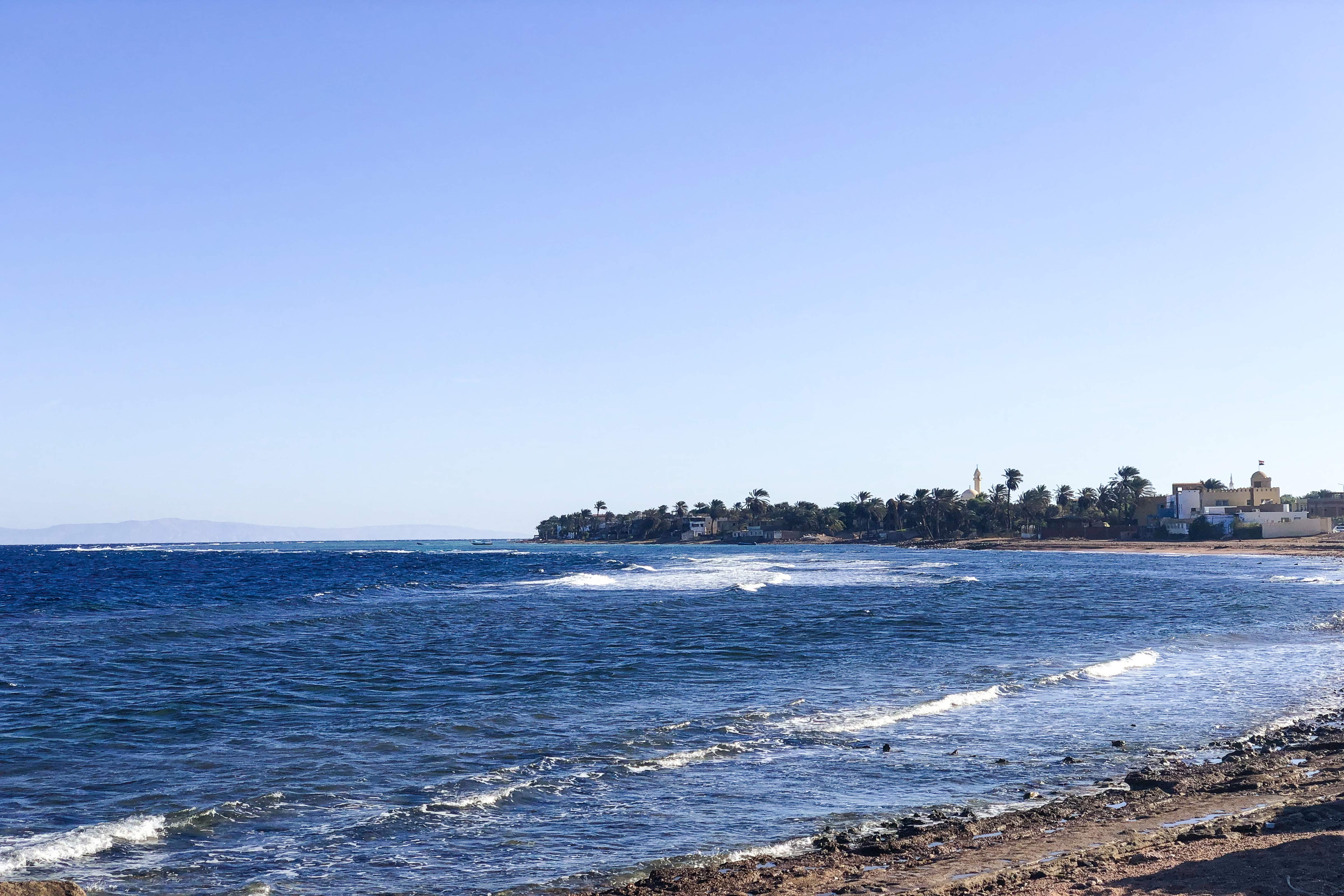 We went there in mid-December – and the weather was perfect! 23 to 25 degrees C during the day and a about 18 to 23 degrees C at night. The water is a bit cold but once you get past that initial shock, it is beautiful. If you are diving then you would probably need a 5 to 7mm wet-suit! 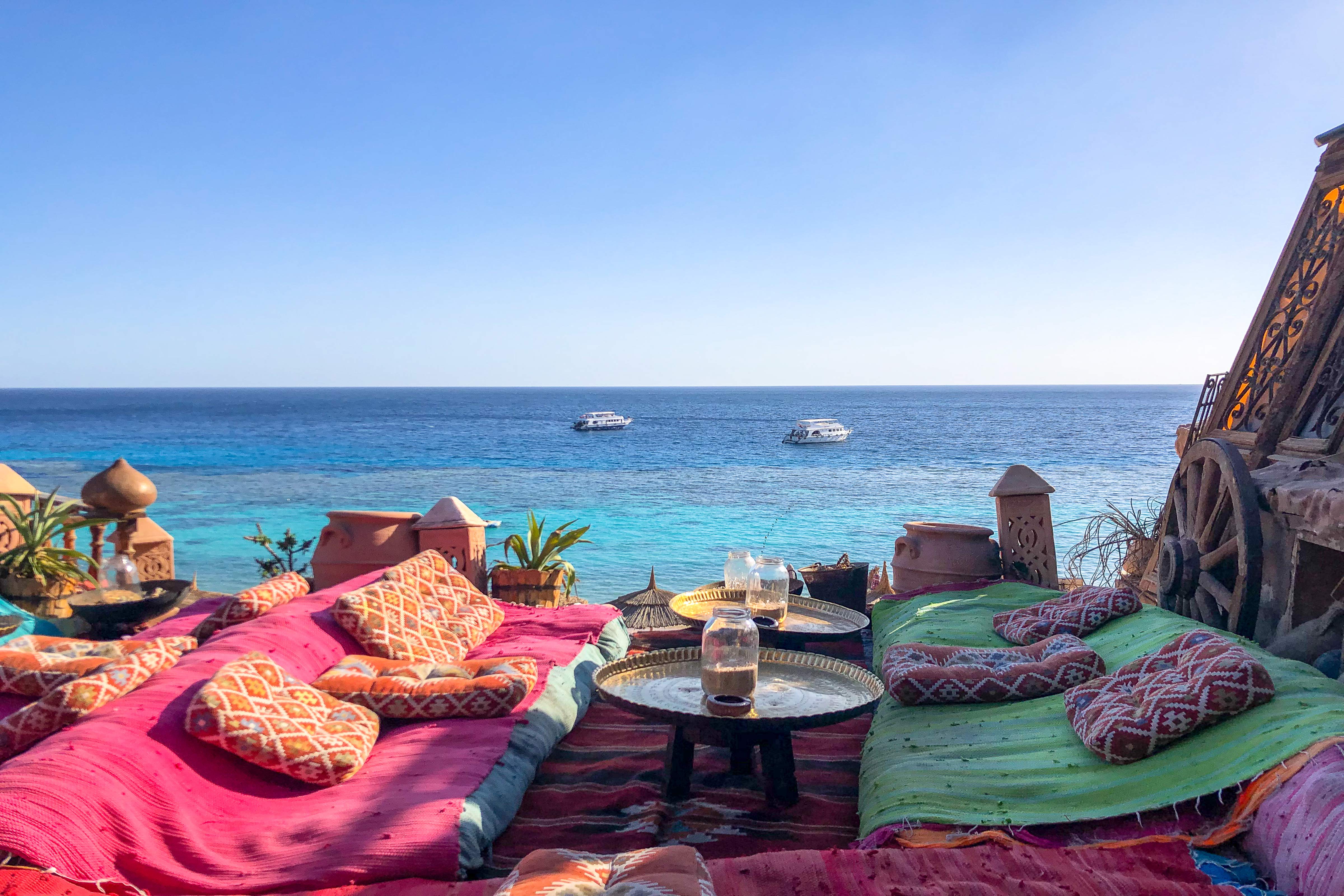 Apart from the diving and lazing around, this cafe was the highlight of our trip here. We spent an afternoon in this stunning cafe that is perched right on the cliff and overlooks the Red Sea. I mean who wouldn’t want to relax here, drink cups of tea and watch the sky change colors as sun dips behind the mountains. Once the sun sets, the entire place is lit with candles and fairy lights. 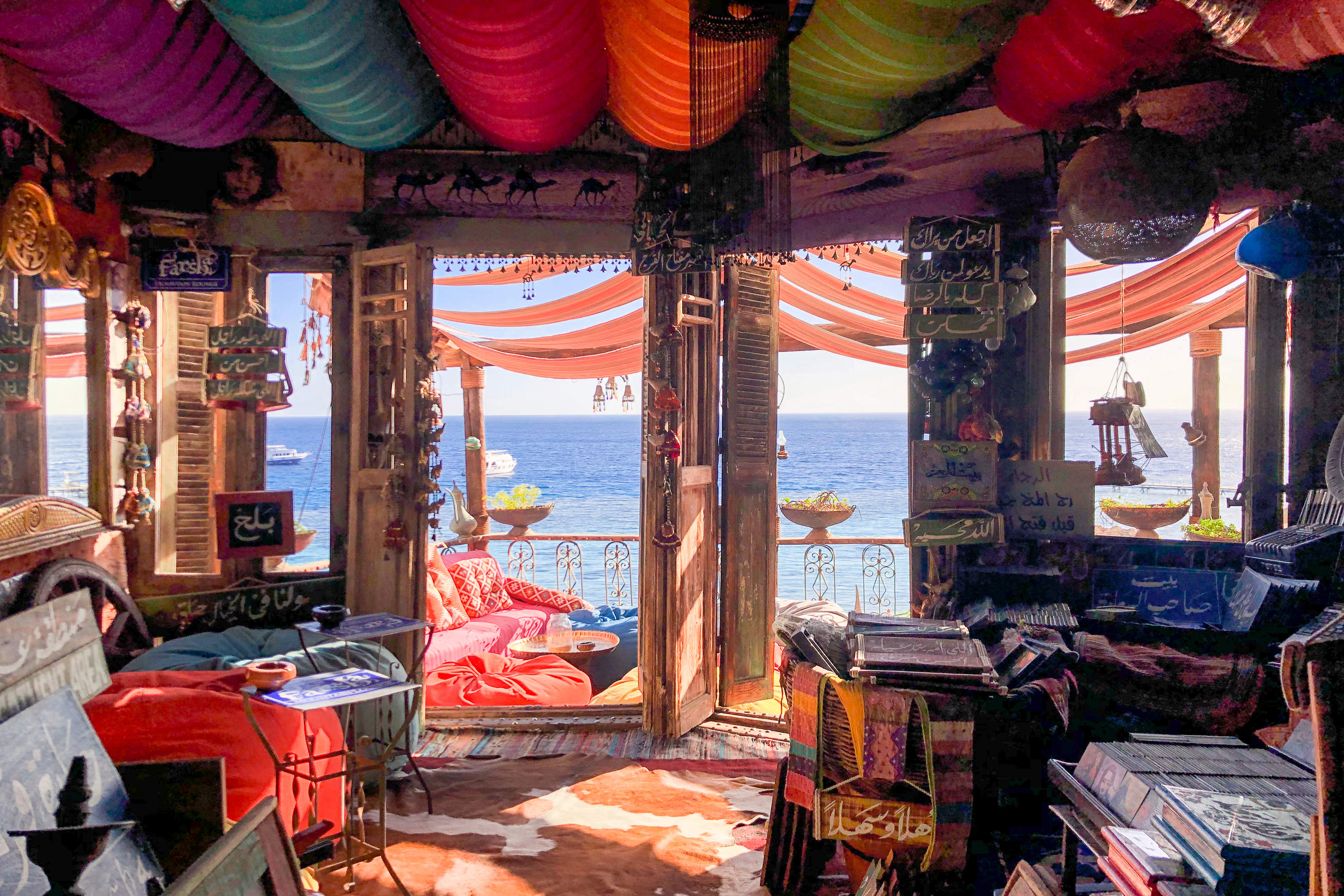 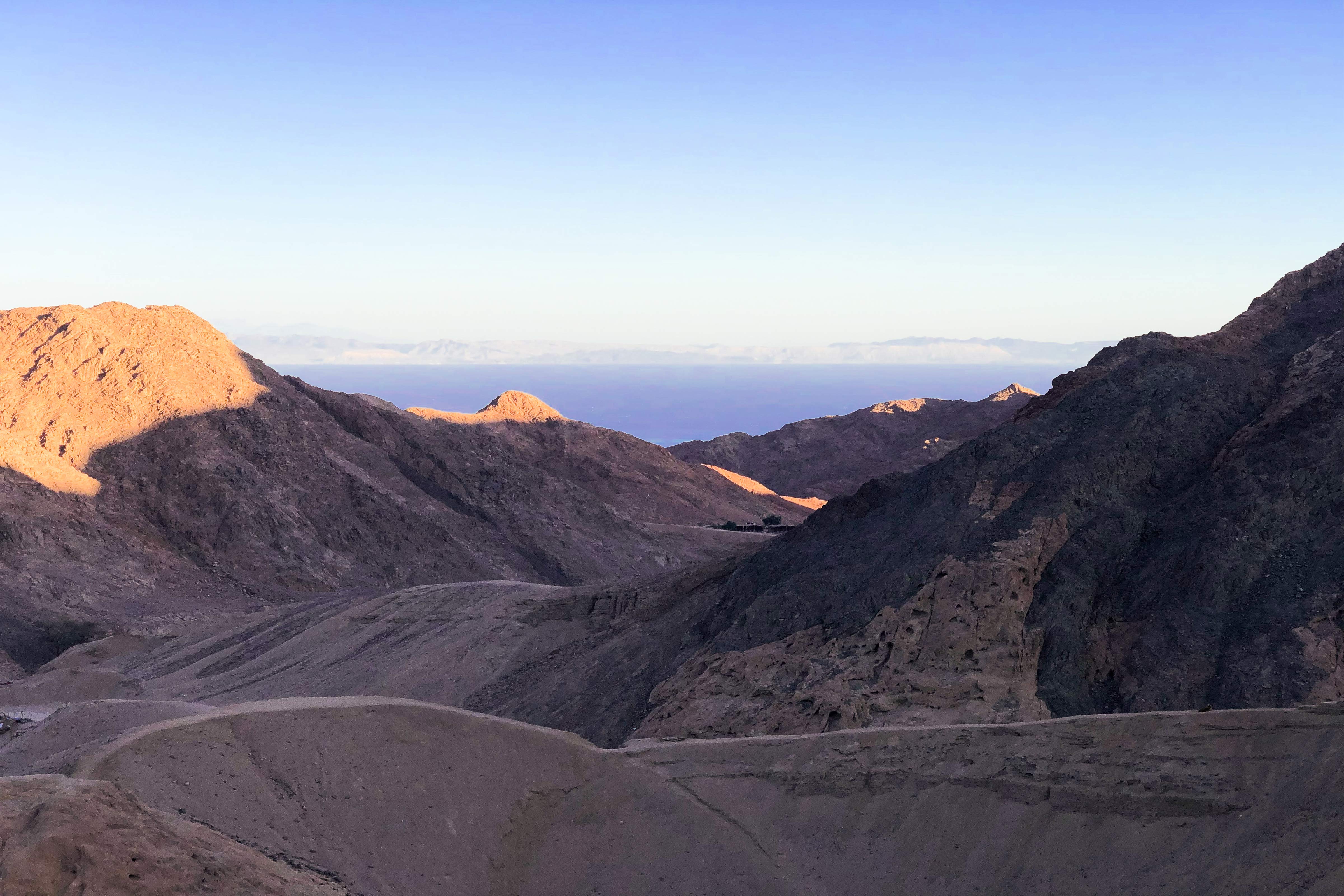 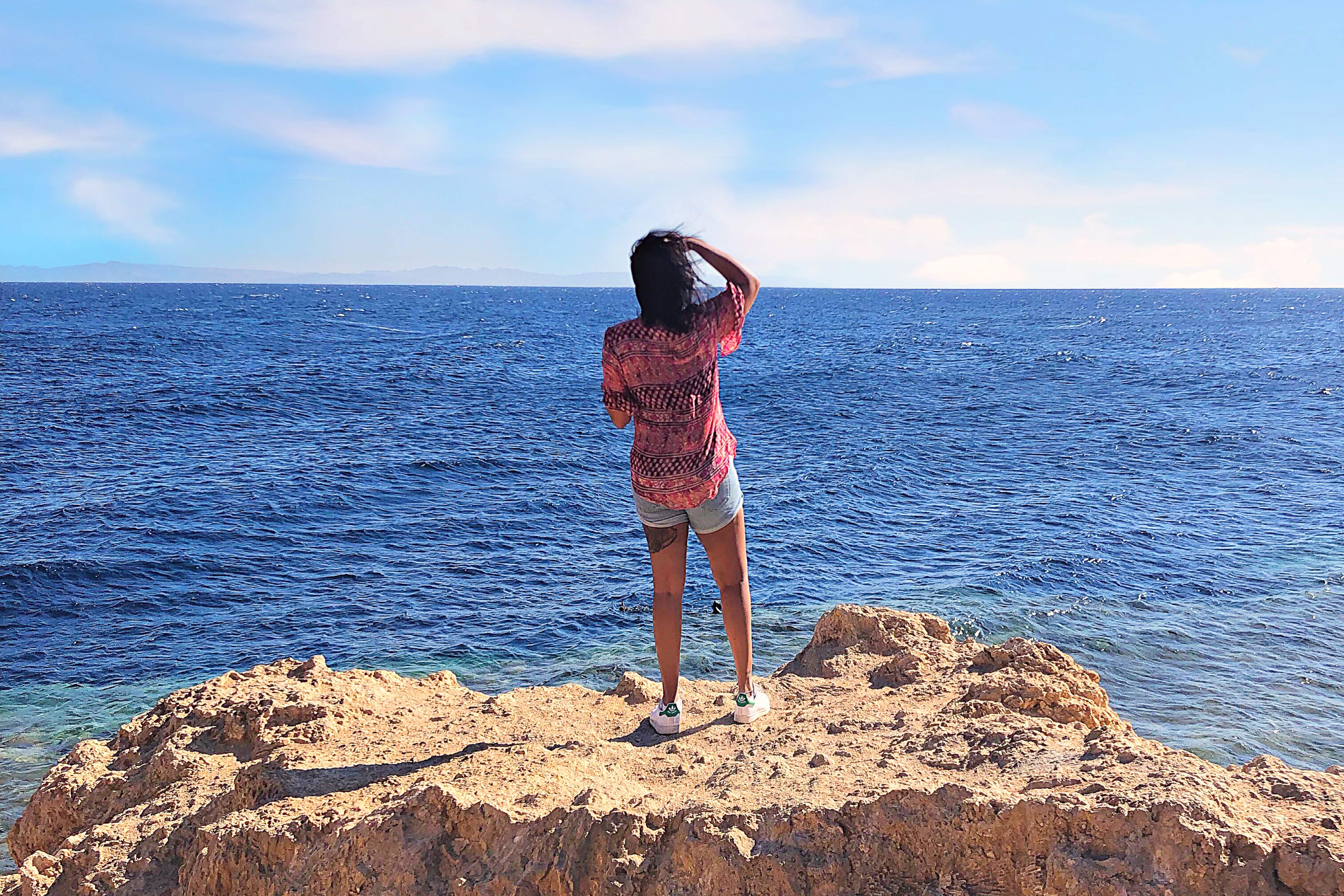 Weather: In Cairo: It was pleasant during the day (a light jacket is required) but it does get cold in the night. So do pack some warm clothing.  In Sharm El Sheikh – Beautiful balmy weather. May need a light jacket at night.

Getting to Cairo: We flew Emirates to Cairo which is about a 4 hour flight and we flew Nile Air from Cairo to Sharm-El-Sheikh – an hour’s flight. You do have the option of going by road but that will take you about nine hours or so.

Transportation: In Cairo: You can rent a car but I would strongly advise against it. Parking is very difficult and the traffic is quite crazy.   Uber/Careem is super cheap, easily available and very trustworthy. In Sharm-El-Sheikh: You pretty much have to rely on local taxis. Hotel taxis are an option but that is probably going to cost you more.

Hotels: We stayed at a wonderful Air BnB in Cairo and stayed at the Hilton Group of Hotels in Sharm El Sheikh.